EA dropped a gameplay trailer for Star Wars Squadrons. And with that some more details about the game were released. What many may find important is the statement by EA that just like Fallen Order the game won’t have any microtransactions or things like a battle pass. So how is the game? Click through for more info!

Ewok Bobbleheads are a thing in the game

You can watch the trailer here, it’s about 6 minutes long and it will explain almost everything you need to know about the game, its various modes, how the actual gameplay looks and what you can do.

The trailer briefly mentions it and it has been confirmed that all the visual customizations and customizations for your fighter can be acquired by simply playing the game and receiving ingame currency you get while playing. There will be no microtransactions.

There will be several game modes, you will have the single player story mode, then there’s the multiplayer only mode with various options and also a mode called “Fleet Battles” which is a multistaged battle and here you can either play with friends online or you can play the battle solo, then you will have AI teammates/enemies, but the rewards will be smaller if you play alone. Despite that it is certainly good news for all those who prefer to play alone.

In the story mode you will change sides between missions, you will have to play (no matter if you like it or not) as both a New Republic and Imperial pilot. You can fully customize your own pilot(s). So you can be a female pilot, male pilot, alien pilot, anything you like.

You can fly these ships in the game:

Ships can also be customized, with various components, weapons systems, but you can also change the visual appearance. And New Republic pilots can also, as seen in the trailer, add an Ewok bobblehead to their cockpit for extra fun during dogfights.

You will have a first person perspective, cockpit view, no 3rd person view will be available when you control your ship.

The following six planets will be battlegrounds in the game:

As of now no DLCs are planned, all the content will be included on day one of release. Star Wars Squadrons is not a “game as a service” or a “living game”.

One NPC you will encounter is Hera from Rebels. She is a voiced NPC, she welcomes you to Nadiri shipyards. 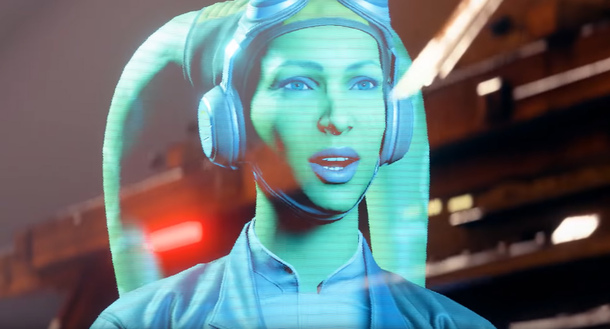 Hera is in Star Wars Squadrons as a voiced NPC

Price will be $40, planned release date is October 2nd. The game will be available on all platforms, crossplay is available, which means PC and console players can play together, a VR option is also available.

The game certainly looks fun. The big question is how grindy it is, i.e. how much of the ingame currency you need to customize your characters and ships. Another question is how long the story campaign will be, I guess it will be about as long as Battlefront’s II campaign and will also serve as a tutorial for the online multiplayer part.

Will you get the game?

Next Article: The Black Series On The Aftermarket