What If.... Playmobil Had A Star Wars License

Today I want to debate a purely hypothetical matter. What if Playmobil had a Star Wars license? Now in the US Playmobil is not as prominent as in Europe, but Playmobil is hugely popular in the old world. While I think that Playmobil will most likely never get (or never want to have) the Star Wars license, I still think it is fun to speculate what things might be like. And I believe a Playmobil Star Wars license could even solve one of Disney’s issues, to engage kids. Why? How? Click through for a discussion! 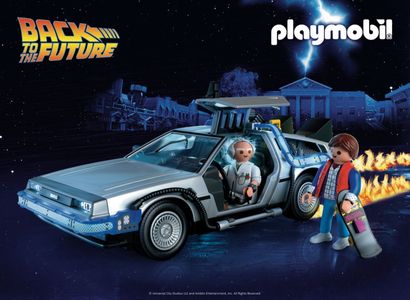 Imagine the Star Wars equivalent of the DeLorean…

The idea of this article came to me when I bought the recent release of the Playmobil Back to the Future DeLorean. For the longest time Playmobil flat out refused to produce licensed toys. This stance only changed when the founder died and a new generation took over. Playmobil still mostly makes their very own toys, but a few licenses were aquired in recent years, the most promiment ones are Ghostbusters, Porsche cars and now Back to the Future.

Here in Europe (maybe not as much in the US) Lego and Playmobil are direct competitors in many ways. You can or could get very similar sets from both Lego and Playmobil, cowboys, knights, pirates, city sets etc. Both brands have huge a huge presence in retail stores.

The question needs to be asked what benefits there would be if Playmobil had a Star Wars license, when both Lego and Playmobil are very similar in some ways (and very different in other ways). While some assembly is required with Playmobil, it is not a construction toy, this is / was the forte of Lego, however Lego’s more recent approach, especially with their licensed sets, mostly abolishes the idea of building whatever you want, and all you do is build models you’ll never disassemble again. And if you leave out the construction aspect of Lego Playmobil may have the edge in several regards. That is: price, aesthetics and fun.

Let’s look at the brand new Playmobil DeLorean set and the almost identical Lego set, both sets feature the DeLorean and the two main characters, Marty and Doc Brown.

This is the Lego set: 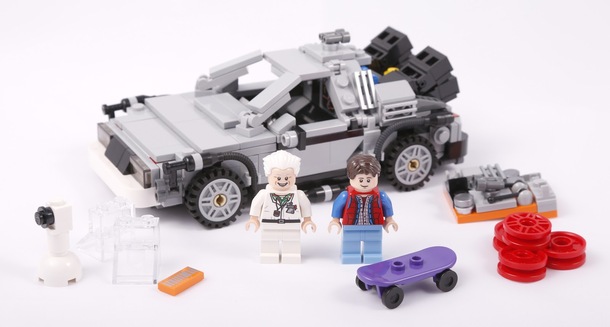 And this is the Playmobil version of the DeLorean: 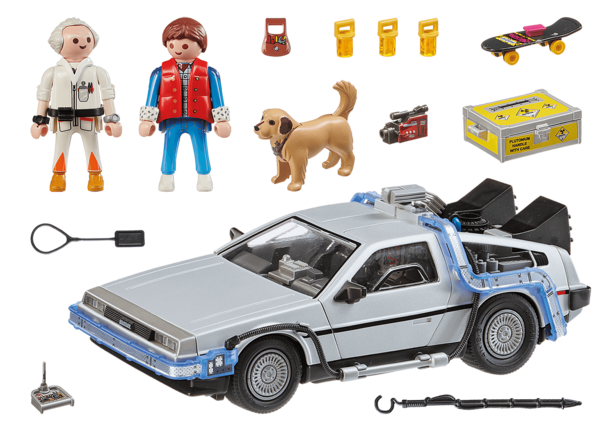 Note: the figures are out of scale here, they are much smaller compared to the car! They can sit inside of it of course.

While the figures are similar in style to Lego (actually Lego changed their minifig design after Playmobil entered the market as an obvious reaction to the new competitor), the car is a whole different matter. The Lego DeLorean looks… weird, the Playmobil DeLorean looks like the actual car. The car also has electronics, you have blue LEDs for the bumper and conduits in the back and you also have an illuminated Flux Capacitor in the cockpit. The wheels can be flipped as well (unfortunately there is no option for a fusion reactor). They even printed the cockpit display with all the dates, you can only see it when you take a hard look, but it’s there! 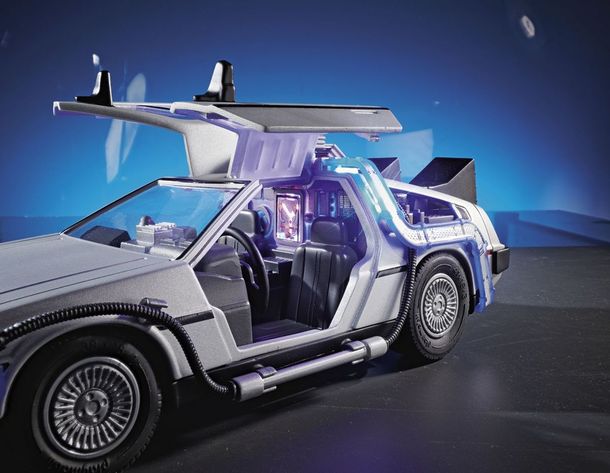 In my opinion Playmobil flat out eliminates Lego here with a) play value and b) sculpt. Playmobil is very robust, Lego may or may not (depending on the model you build) be rather fragile and bricks may come loose, you don’t have this issue with Playmobil, the vehicles can take a beating.

But I don’t want to talk about the DeLorean all that much, what I wanted to illustrate is that Playmobil can sculpt excellent vehicles, the Ecto-1 from Ghosbusters is yet another example here. And the carious Porsches are also great examples.

And now let’s talk about Star Wars: I believe a Playmobil Star Wars line that has the classic roster of Star Wars vehicles: X-, A- and Y-Wing, maybe even B-Wing, plus regular OT TIE Fighter and TIE Interceptor, a Landspeeder, even the Tantive IV with all the relevant figures could achieve what Hasbro, as far as we can tell, has not achieved yet. To get kids to actually buy and play with Star Wars toys. Sure, you may say that Lego has all these sets and that they are doing fine. Maybe so, but Playmobil versions of the ships would look a lot better, they might even, in certain ways, rival or at least get near what TVC gets.

And here’s the thing: the Lego DeLorean is more or less exactly 1/18 scale, the Playmobil figures are underscaled compared to the car, they look like kids next  to it. The cars and many other vehicles (including the Ecto-1 or the various Porsches) have a larger scale than the figures. 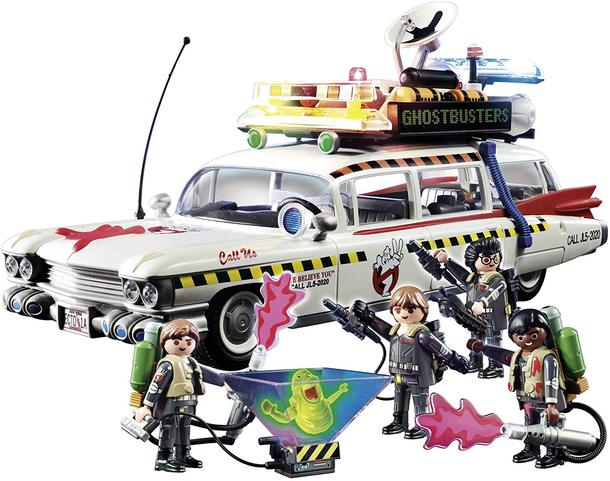 MSRP for the Ecto-1a was 60 euros (you can get if for 40 euros now), the set comes with (almost) everything you see here, only Slimer is not included

Ignoring the fact that Hasbro/Lego will never accept a Playmobil Star Wars license, I think Playmobil would make an excellent addition to the world of Star Wars toys. Playmobil is also usually offering lots of playsets. For Ghostbusters you could get the firehouse. They could provide fans with an entire ecosystem of playsets, buildings, vehicles and their stylized figures.

Imagine a mostly realistically sculpted Playmobil X-Wing and TIE Fighter, complete with electronics, lights and maybe even sound. Imagine a Cantina and Lars Homestead playset. Sure, the paint apps would be basic, Playmobil uses mostly colored plastic and then they either print a few parts or provide you with stickers, these are toys after all, not collector pieces, but the toys would still look fantastic and have a realistic style.

The idea behind it all is that Hasbro’s offerings for kids are severely lacking. The GoA line has few vehicles, none that are really relevant, there are no playsets, there is no ecosystem. Lego has all of that, but Lego is expensive. Really expensive. And you have to like the Lego aesthetic, with visible studs and seam lines, it is part of the charme, of course, but you have to like that aesthetic.
Here in Europe (and elsewhere) both Lego and Playmobil have peacefully co-existed for decades now, even though both manufactures cover many of the same themes, you can get Lego police, a Lego fire truck, Lego airplanes, Lego Space Shuttle, Lego knights etc – and you can get the same from Playmobil. So maybe Playmobil Star Wars would just fill a niche that Lego and Hasbro can’t fill. The niche of a toyline that not only provides you with a rich ecosystem (which Lego has) but is also easier and more robust to play with.
And sure, in theory the 3.75 in scale has many of these things as well. But kids today, unless their parents are hardcore collectors, don’t have access to all the playsets, many of the vehicles, and the new vehicles are really expensive. A theoretical $60 Playmobil X-Wing would be much more kid friendly than a $100 TVC version. And of course Playmobil always adds figures and lots of accessories, unlike Hasbro, just look at that Ecto-1a or DeLorean again. And Playmobil is more robust than any TVC figure can ever be, it’s a better toy, not as much a collectible.

And TVC fans might even get vehicles through the backdoor.

One more thing. Playmobil is usually cheaper than Lego. Considerably so. Now of course the Star Wars license would add some costs, but even it it still were ca 20% royalties I firmly believe that Playmobil variants of the Lego sets would be a lot cheaper.

So instead of half hearted attempts like Galaxy of Adventures or things like TVC and TBS which almost exclusively appeal to adult collectors, I believe Playmobil could fill that kid shaped hole in Star Wars toyland and enthuse both parents and their kids. Sure, Lego is very similar in many regards, but Lego is more fragile (usually), Lego looks like Lego (and thus is only a crude approximation of the actual design) and this is where Playmobil could fill the niche.

So what do you think? Would you like to have a Playmobil Star Wars toyline? For kids? And maybe even for yourself?

Next Article: The 4K Version Of The Empire Strikes Back Comes To Cinemas In The UK