In Italy, Star Wars figures were released under the Harbert company label. The name of the line for the first Star Wars figures there was called Guerre Stellari. The card back didn’t vary all that much for the ones produced by Kenner, but there are obvious differences as you inspect and compare. Featured on 20-Back, the reverse side of the card features the same toy images in colored blocks made famous by Kenner, in addition to a few other related toys, including the Millennium Falcon and the X-Wing Fighter among others.

Today we revisit Walrus Man. The figure wasn’t made available in the Trilogo line, so we’re representing it on the Italian Guerre Stellari packaging for our update today instead. The review’s Collector Notes are updated with this information. See the full card art and additional notes by revisiting 1979’s STAR WARS Walrus Man figure HERE. 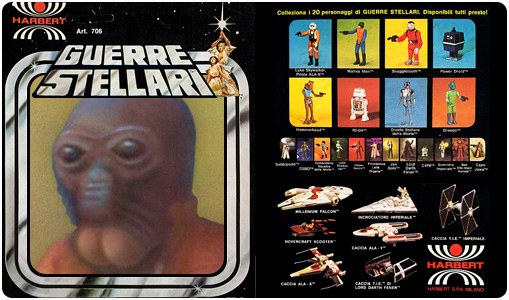 Previous Article: The Black Series HyperReal Luke Skywalker (Bespin) Is Tearing Right Out Of Its Box!