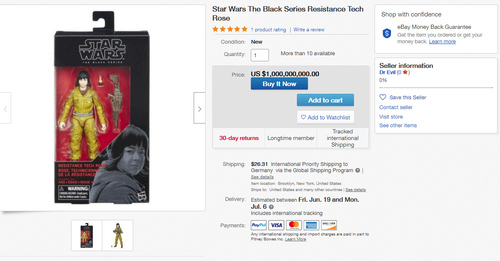 Yes, that ebay screenshot is fake, I created it by editing the ebay sourcecode, you can easily do that with your browser 🙂 There is no Dr Evil of course who wants to sell a Rose action figure for 1 billion USD.

First a few words about the method I used. I only looked at completed listings. The reasoning behind that is that Dr Evil may ask for 1 billion dollars for his Rose Tico action figure on ebay, that doesn’t mean anyone actually buys a Rose Tico figure for 1 billion dollars. To say a TBS Rose action figure goes for 1 billion dollars would therefore be very misleading. Only completed listings give you a somewhat more realistic overview of actual prices people paid on ebay. Also, once you filter for completed listings you can also see which auctions were not successful, i.e. this can give you a good idea about how much  people are actually willing to spend for a figure. You can also see in the completed listings if a seller had to accept a lower price and could not sell the figure for the intended target price.
Also, I only looked at listings that are either new or mint either in the box or on the card, so no loose figures. Loose figures are always cheaper, of course, so the prices listed below are all for figures that were labeled as “new”.

I generated a table with the TVC and TBS listings I examined, please click the image below for better legibility:

The side by side view shows how identical characters in TVC and TBS perform on ebay.

And here are the listings in text format:

* unfortunately many Baby Yodas and other Mandalorian figures get lumped together here, the actual Mandalorian action figure has more than 1,000 completed listings but nowhere near 3,000

So what can we say?

One general observation is that Black Series listings are much more numerous. What are the possible explanations?

My guess is that the much more numerous TBS listings are a clear indicator for higher TBS production runs. It’s generally much easier to find more TBS listings and to get better prices, because there are more sellers.

The final question is if this non-randomized sample of ebay listings can still give us a few ideas about the toylines on the aftermarket. It was out of the scope of this article (read: I only have so much free time) to look at all the modern TVC/TBS figures, but I think the selected figures represent both toylines relatively well.

And based on that we can say that sequel trilogy figures usually have a harder time on the aftermarket, but figures based on other Disney content have no such problems, unless their name is either Jyn or Cassian. But that being said, Jyn was sold on ebay quite often, several hundred times in the past few months, which means she is one of the most sold Star Wars action figures in recent months. Sure, most figures were sold for little money, but there are numerous people who wanted a Jyn. Four years later. So maybe a photoreal Jyn Archive release would not be as crazy as it sounds. All other Disney Star Wars creations such as Aphra, The Mandalorian and especially Ezra are all very much in demand and command very high prices even. They prove to be more in demand on ebay than someone like General Veers.

What are your own observations on ebay? Are you one of the impatient collectors who pay any price or do you have the patience to wait for a good deal? Do you usually spend more than MSRP on ebay for the figures?