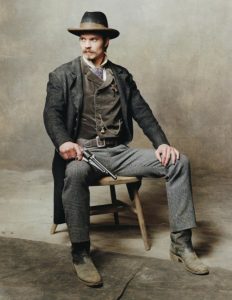 Slashfilm reports that Timothy Olyphant will wear Boba Fett’s armor. Their source(s) tell them that Olyphant was spotted on set, wearing the armor. Now, the report doesn’t say he will be Boba Fett. Unless the previous leaks about Temuera Morrison portraying Boba Fett (and not Rex, for example) are incorrect, Morrison will still be Boba Fett, but without his signature armor apparently. Which does sound somewhat confusing. So I am not sure anymore if Morrison portraying Fett makes a lot of sense if Olyphant is wearing the armor. Why would Boba Fett crawl out of the Sarlacc Pit and then leave his armor behind?

Slashfilm speculates that Olyphant may be a character from Chuck Wendig’s Aftermath novels, “Cobb Vanth”, who acquired Fett’s armor from Jawas who scavenged Jabba’s sail barge after it was destroyed. Vanth is a self-appointed sheriff in a settlement on Tatooine.

But this is pure speculation on their part. the only thing that is known at the moment is that Timothy Olyphant is wearing Boba Fett’s armor – if Slashfilm’s sources can be trusted.

So, what do you think? Would like to see both Boba Fett without his signature armor and someone else wearing it instead? Or would it be better if Morrison portrayed Rex, not Fett, and the fate of Boba Fett remains a mystery, with whatever character Olyphant is playing merely wearing his armor?

Read the full story on Slashfilm!