Katee Sackhoff Will Be Bo-Katan In The Mandalorian

The leaks (or reveals) for The Mandalorian season 2 continue. After learning that Ahsoka (and possibly Sabine and maybe even Rex!) will be in season 2 of The Mandalorian and that Boba Fett is featured as well, Deadline now reports that Katee Sackhoff, who voiced Bo-Katan Kryze in The Clone Wars, will now play the character in The Mandalorian season 2. Season 2 could very well turn out to be one huge guest star festival with so many prominent characters making an appearance.  Bo-Katan’s inclusion does make sense though, since she may want her darksaber back from Moff Gideon.
How do you feel about the inclusion of yet another Clone Wars character? Ar you excited about the possibilities or do you fear season 2 may get overwhelmed by its various guest stars? 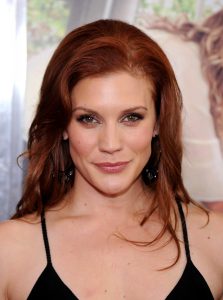