The Black Series Gets A New Imperial Stormtrooper Figure

It seems Hasbro is finally retiring the much used original Imperial Stormtrooper sculpt we first saw all the way back in 2013. A tweaked and refined Imperial Stormtrooper (based on the appearance in The Mandalorian and Rogue One) was also revealed today. You can immediately tell that the new Stormtrooper looks even better than the old version. Articulation has also been tweaked and improved, the figure has new elbows and new shoulder pads make sure you can move the arms around much better now. The helmet is certainly another huge improvement! This is the new TBS troop builder you want to have for your 6 inch scale Stormtrooper squad! You can pre-order him later this month on May 28th! 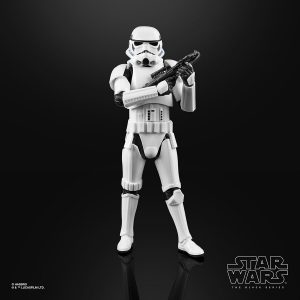