Meet The Heroes Of The High Republic

Last Friday the official Star Wars website introduced some of the all new High Republic heroes you are going to meet in various upcoming novels. So who are the new Jedi upholding peace and justice in the galaxy? Click through to meet them! 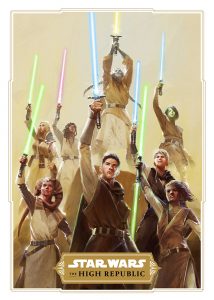 First we have Avar Kriss, the “best of the best”. 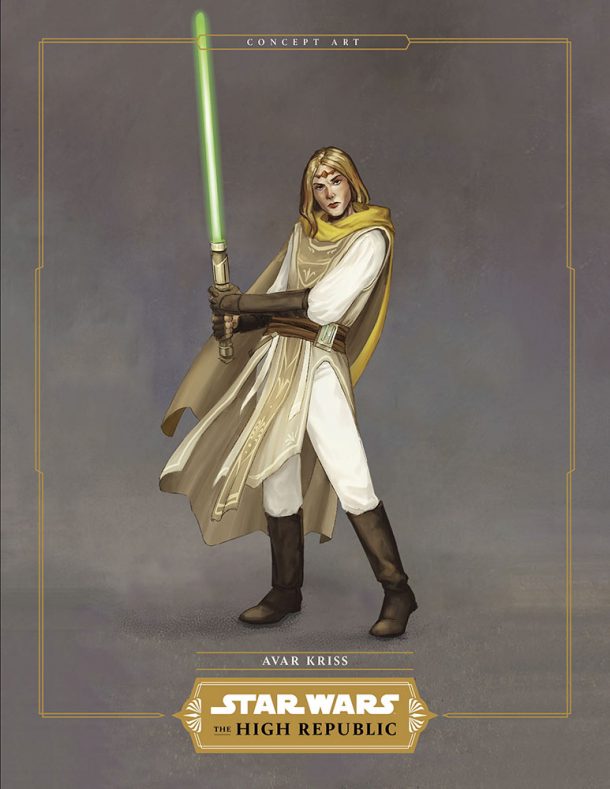 According to the official info Avar is the brightest and most noble example of Jedi-hood. She’s an inspiration for those who work with her. She also seems to like posing like some 1980s hair metal rockstar, and that lightsaber handle is huge, but that’s just my random observation.

Next up is Loden Greatstorm, who is considered to be one of the best teachers in the Jedi order. 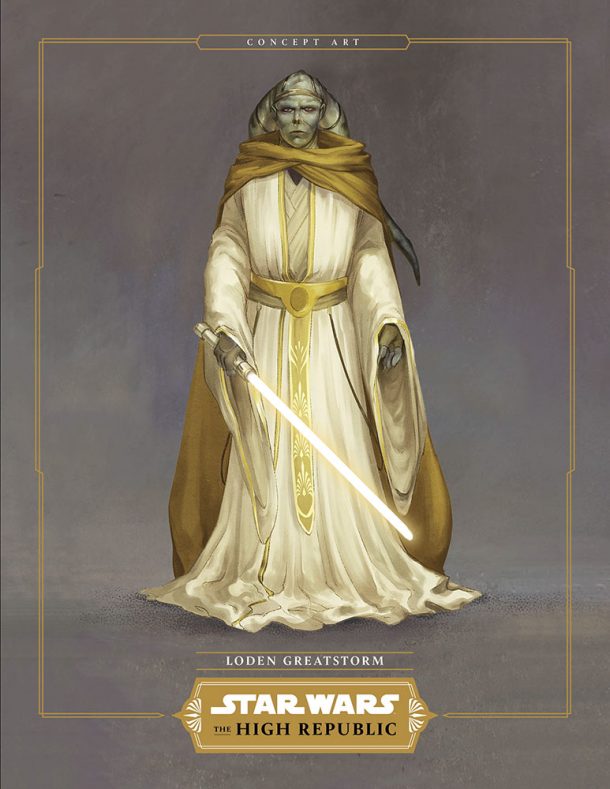 He is strong and wise. And even though his concept art wouldn’t let you guess it, he has a good sense of humor! I wonder how he could possibly fight or do anything in these long, flowing robes, without tripping over his own feet. But of course it’s just concept art, and these are most likely some kind of ceremonial robes, nothing he would wear if on a mission. Or so I hope! For him.

And here is Keeve Trennis, who is teamed up with Avar Kriss and starstruck by her. 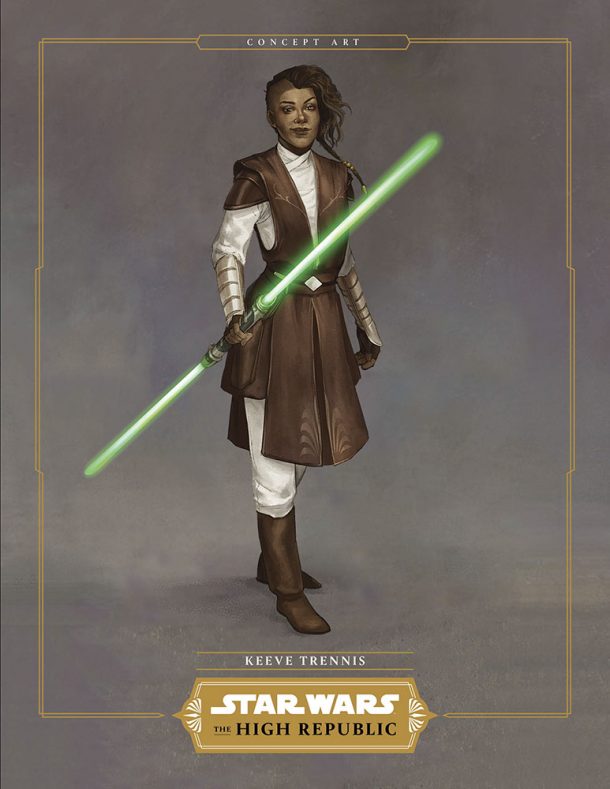 Keeve is still a very young Jedi knight. Quick-witted and more impulsive than she should be, but also a little bit insecure about herself. And it seems we now know that Rafa Martez’ hairstyle once was all the rage in the galaxy.

And here is Stellan Gios, an optimistic Jedi Master. 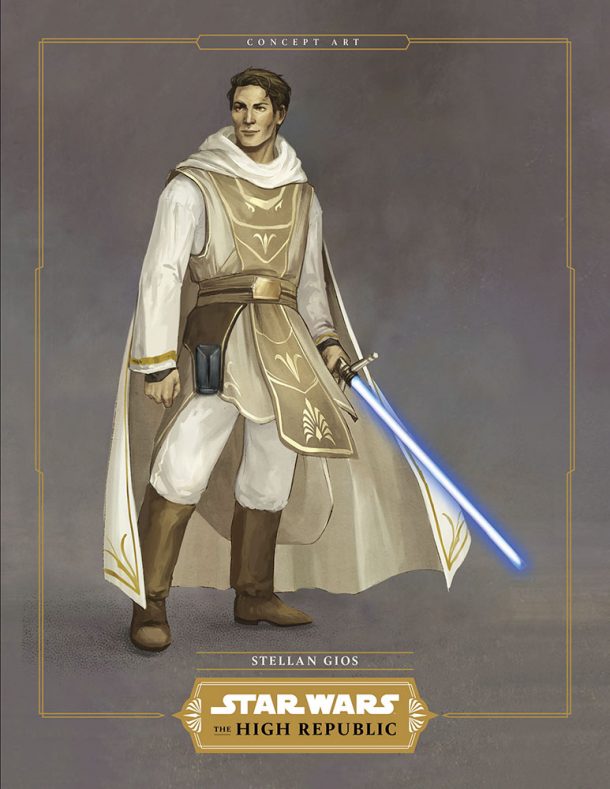 He rose through the ranks alongside Avar and the two of them make one powerhouse of a team. But he’s currently stationed at some remote Jedi Temple outpost. Surely nothing at all will happen there? Also, when did Jedi abandon very useful crossguards for their lightsabers? 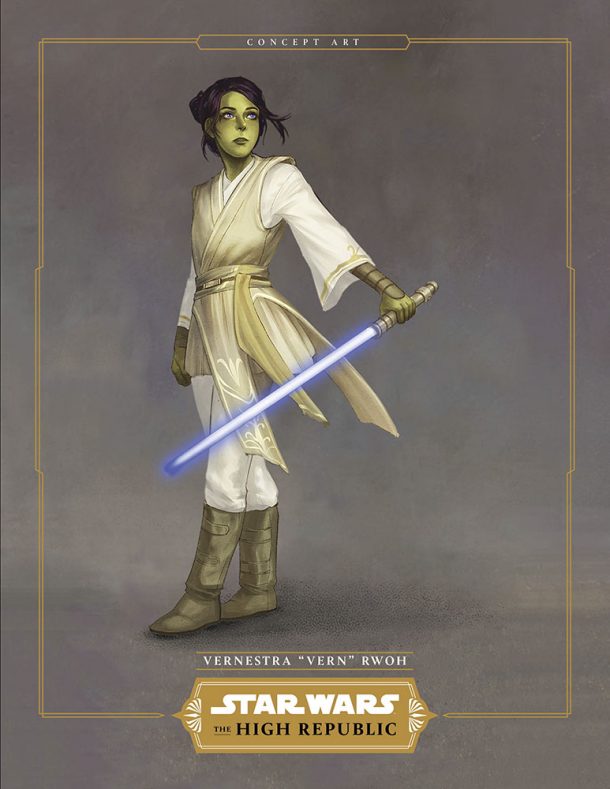 She’s only 16 and one of the youngest Jedi in a generation. She used to be Stellan Gios’ padawan and she struggles to fit in with the adults. So she’s probably the awkward teenage girl trying to find her role, standing in for all the real world teenage girls trying to find their place in the world.

What I find somewhat disappointing is the disturbingly beige color pallette used for the concept art. I really wish Star Wars would explore some other color options for the Jedi knights, other than beige, brown or white. But that’s just me.

One more detail, in the High Republic era padawans wear a sash and don’t have braids, this was revealed by “Test of Courage” author Justine Ireland on Twitter. Also, “Vern” will indeed have a purple lightsaber.

Ireland also posted another piece of concept art on her Twitter, which provides an alternative look for several of the characters: 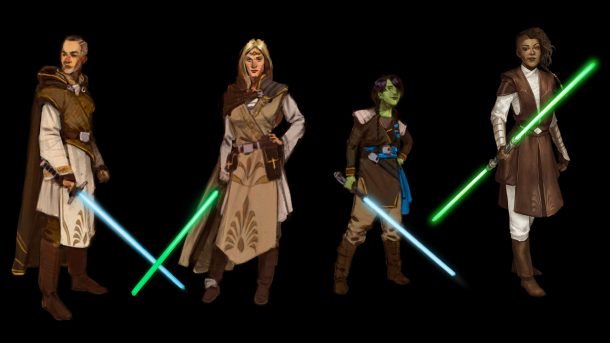 So what do you think of the new heroes of the High Republic? It seems to me that Lucasfilm checked all the boxes. There is a character archetype for virtually everyone. Will you buy the various upcoming books and comics and are you interested in the new High Republic period set 200 years before the events of the prequels?

You can read more on the official Star Wars website!

Next Article: StarWars.com Has A First Look At Shadow Fall: An Alphabet Squadron Novel