Without any announcement Hasbro put an all new action figure toyline up on their website. And it’s a new scale too! Meet the new budget 9.5 inch Star Wars action figure toyline. MSRP is $9.95. For now you can buy four characters, Darth Vader, Luke Skywalker (ROTJ), Kylo Ren and a First Order Stormtrooper. Articulation is extremely limited. These are actually 4 POA figures, the points of articulation are the shoulders, head and the waist. So yes, no leg articulation at all. Click through for images of the figures out of the box! 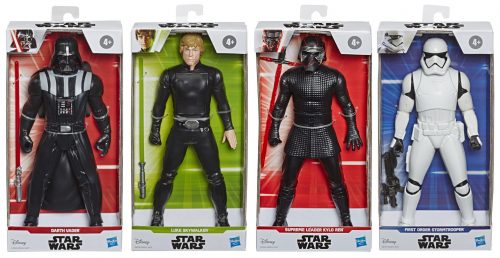 And here are the figures out of the box:

This is what Hasbro has to say about the new action figure line (text taken from their website):

With the 9.5-inch scale Star Wars figures from Hasbro, kids ages 4 and up can imagine the action and adventure of the Star Wars Galaxy. Featuring Star Wars-inspired design several points of articulation for poseable fun, boys and girls will love recreating favorite moments from the Star Wars movies, including Star Wars: A New Hope, Star Wars: The Empire Strikes Back, Star Wars: Return of the Jedi, and more!

These new figures cost about the same as the 12 inch 5 POA figures. Will the new line replace the 12 inch line? For now, the 12 inch figures are still available.

The question is… what kid needs 9.5 inch 4 POA action figures when there are also 5 inch super articulated Galaxy of Adventures figures that cost the same? Ok, the latter are stylized, but still look a lot better.

Add your constructive thoughts in the comments! Will you buy the new line? Or will you ignore it?