The Galaxy of Adventures shorts return with season 2! Season 2 will move forward in time, however, and will apparently focus on the sequel trilogy. Given the fact that there are sequel based action figures in the toyline it only made sense for Lucasfilm to give the sequels the same treatment as the original and prequel trilogy movies before. Season 1 was mostly received quite positively – even if some of the shorts inserted some creative freedom into the source material – with quite a number of fans even asking for all animated movies in the Galaxy of Adventures style.

UPDATE: apparently season 2 will also feature a lot more prequel trilogy content than before, so season 2 won’t just feature mostly the sequels! Matt Martin, a member of the Lucasfilm Story Group, confirmed this on Twitter. And season 2 will also have all new content, so not just animated scenes with movie dialogue.

You can watch the season 2 trailer on YouTube! The first new episode should be released on the Star Wars Kids channel very soon!

Will you check out the new season? What would you say to an entire movie in the Galaxy of Adventures style, i.e. combining original dialogue and all new animation? In my opinion that could be something that many fans would like, including kids. 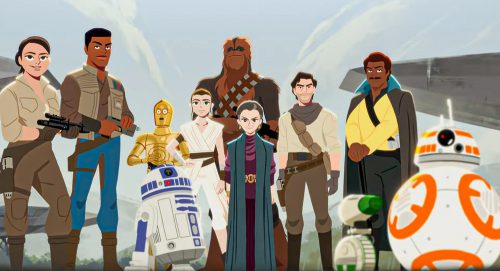