Toy Run Tuesday #36 - The Armorer in TVC and Hyperdrive Repairs

Hello again, fellow toy runners! This week was an excellent week for Star Wars collecting. I got the most expensive piece in my collection this week, and completed multiple custom figures. I’m very excited to share them with you so please click on through!

First off, I wanted to share a piece I’ve been after for probably a couple years now. I ended up scoring it for a great price on eBay loose. This is one of the rarer accessory sets from the 90’s Phantom Menace line: The Hyperdrive Repair Kit. All the panels come off and it came with several tools. This exact model of hyperdrive can be seen in Episode 1 on the Royal Naboo Starship. The other hard-to-find accessory set is the podracer fuel station, but I won’t be hunting that one down so determined as this one. 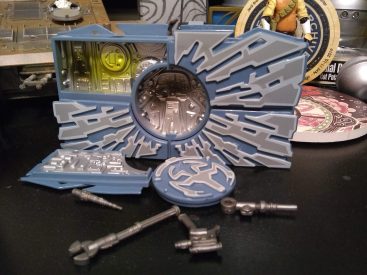 Next, you’ll see the most expensive single item in my Star Wars collection. I’ve done very well at collecting on a budget, but this was one piece I just had to have. I’m only slightly obsessed with The Mandalorian, and the troop transport is one incredible toy. Along with the transport I received a second Gamorrean Guard and 4 more Rogue One stormtroopers. 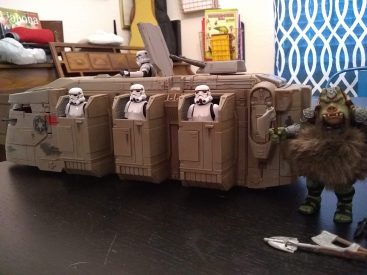 Two of the stormtroopers I got in the mail didn’t last very long in their pristine white armor. Up next are some customs I finished this week. Two of these troopers were stationed on Jedha before the destruction of the city. I’m very happy with how the weathering turned out on these troopers. Their backpacks can be found here. 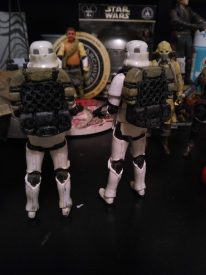 Lastly, I finished two customs from The Mandalorian. The Kubaz taxi caller from the first episode was instantly a classic, yet intriguing design. It was as soon as he appeared on screen I knew I was watching a Star Wars show. Hopefully my custom does him justice! Last, but certainly not least, is The Armorer. What an amazing design for a Star Wars character. The helmet for this figure is a 3D printed piece from Watto’s Scrapyard, who I posted about a few weeks ago. The chest armor was sculpted by me. I had to get a little creative with her beskar hammer – it is the end of the hose that connects sebulba’s podracer to his engines! That’s all for today, folks! Thanks for tuning in to this week’s edition of Toy Run Tuesday. Please be sure to leave pictures of your week in Star Wars in the comments below, or if you’re having trouble with Disqus, please post them in the comments section of this article on Facebook!

Next Article: Preview Of Behind The Scenes Clip For The Rise Of Skywalker