It looks like Hasbro has made an update to the Imperial Stormtrooper (VC140) addressing the issue with yellowing torsos. JTA reader Josh sent in this image with a comparison picture featuring a newly released Stormtrooper versus an early release. The figure on the left has an obviously whitened torso compared to the earlier release, which shows signs of yellowing. Entertainment Earth still has this up for pre-order if you missed it the first time or are interested in the updated non-yellowing version. 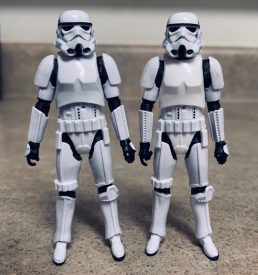 Next Article: New Episodic Photos from The Mandalorian Chapters 7&8 at SW Authentics