The Refocused Attention For The Vintage Collection: Kenner's 96

Unless you’ve been sleeping under a rock, the biggest news to take away from NY International Toy Fair is that Hasbro has refocused their efforts to bring us what they’re calling the “Original Kenner 96.” (more….)

This is huge news, because for years, and I can QUOTE Hasbro on this, they’ve always said “it’s something we’d like to get to.” Now it’s a reenivisioned focus…. which is FANTASTIC.

The “96” derives itself from the 92 figures featured on the back of 1985’s The Power Of The Force card back. Additionally, Yak Face, the original Artoo-Detoo (R2-D2), See-Threepio (C-3PO), and Artoo-Detoo (R2-D2) with sensorscope are the other four that make the total 96. One can argue that there are others. For example, Sy Snootles & The Rebo Band add three more to the lineup, and many more fans consider Jabba The Hutt as well. Easily, the number is closer to 100. But let’s, for the sake of this article and Hasbro’s newfound direction, say there are 96.

It’s more important than ever to let your voice be heard, so Hasbro knows which figures to focus on to complete the original vintage Kenner lineup. We’ve reviewed all of the Kenner figures released between 1978 and 1985. You can find all of the categories HERE. Or, you can search our Star Wars archives, our The Empire Strikes Back archive, our Return Of The Jedi archive, and our The Power Of The Force archive. Most importantly, in each action figure review, we’ve added a section where we designate which modern Hasbro figure is the closest counterpart to the vintage Kenner figure. See the example below. 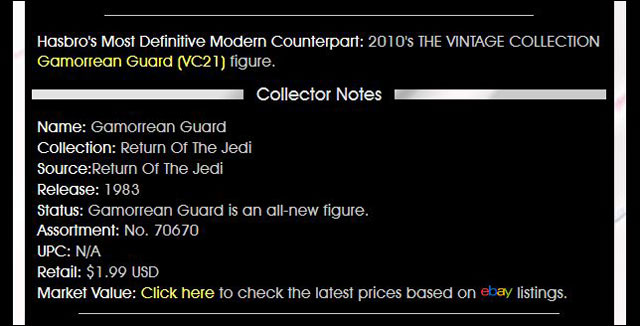 For years, in the past, we compiled reports like THIS ONE FROM 2013, and while most of the entries still hold, it needs many updates. We’d thought we do something a little differently this time. We’ll distill the latest status we’re at, however. With the announcement of the 2020’s  TVC Power Droid, we only need the puppet version of Sy Snootles, Bespin Security Guard (with mustache), and Sim Aloo. (But there are MANY characters that need definitive updates.)

We’d like for you to compile a list in our comments of figures for which you’re desperate to see an update, produced for the first time, or released finally in The Vintage Collection. My suggestion would be to focus on the never-before-produced characters like Sim Aloo and the Bespin Security Guard with the mustache, but that’s me. Let your voice be heard. Hasbro is listening and watching. And if they have a new agenda on tap for The Vintage Collection, it’s pivotal for you to leave your voice here.