What Is Hasbro's Strategy For Star Wars In 2020 And Beyond?

Following the rather lackluster Toy Fair presentation one has to wonder what Hasbro’s strategy for Star Wars is, now that the license has been extended for a new multi-year deal. With the Mandalorian still fresh on people’s minds, Baby Yoda still very popular and a brand new season of The Clone Wars airing on Disney+ right now one would think that Hasbro would focus much of its efforts on supporting the two new shows. Especially given that fact that The Mandalorian has proven to be extremely popular with most collectors. But instead we got (almost) nothing for either of the two shows. So what is Hasbro’s strategy? Click through for some thoughts! 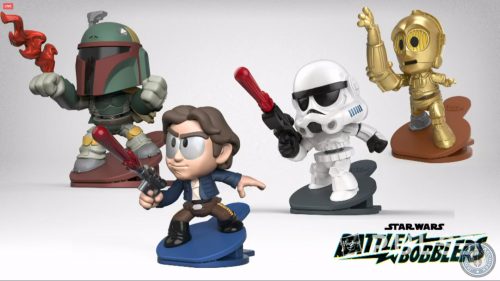 First a disclaimer: I know nothing, I am not privy to Hasbro’s reasoning behind their decisions, I have no inside sources, I literally know nothing. So what I will do is speculate and try to make educated guesses.

Most collectors, especially fans of The Vintage Collection, will feel either bewilderment, amusement or maybe even outright anger and disappointment after this year’s Toy Fair presentation.

While The Black Series did get a few nice items, the Snowspeeder the huge highlight here, The Vintage Collection gets one all new figure, one repacked figure and one repacked and repainted vehicle. And nothing else. And literally nothing was shown for either The Mandalorian or The Clone Wars. So what is going on here?

Maybe Hasbro wants the first six or eight months of 2020 to be about The Empire Strikes Back. Maybe they felt it’s better to have a focused toyline instead of offering toys from two, three or even four different sources all at once.
And while Hasbro did release a few Mandalorian figures in time for The Black Series, with a few figures coming now for The Vintage Collection, maybe they didn’t feel confident enough about the show to go all in back in 2019, when these things would have needed to be developed in time for a release now. Remember, Hasbro needs ca. 12-18 months from development to retail for a figure. So they would have needed to start work on The Mandalorian early in 2019 to have something ready for spring/summer 2020. Also, Hasbro did not know about Baby Yoda, he will come later in 2020. Maybe Hasbro had some doubts about the success of the show and decided to wait for fan reactions before they go ahead with further plans. Which they, if they are smart, are doing now.

But perhaps Hasbro wanted to save TCW for the holiday season as well. With no new movies on the horizon Hasbro need something for the holiday season 2020. And maybe they felt Mandalorian toys as the sole focus would not be enough. So to add some variety we’ll get both Mandalorian and Clone Wars toys in the second half of 2020. So for 2020 the plan would be to focus on the Original Trilogy and Empire Strikes back for the first half, while Disney+ will be the focus in the second half or last quarter of the year.

Another possibility: with the unclear licensing situation Hasbro stopped or slowed down development of new action figures. Perhaps not all that much was planned beyond what Hasbro had in mind for the Empire Strikes Back line. That doesn’t explain why The Vintage Collection had almost no reveals today though or why The Clone Wars is completely ignored.

It’s also surprising that nothing was revealed for The Rise of Skywalker, a movie that was released only two months ago. While yet another somewhat controversial Star Wars movie it’s safe to say that most collectors would at least buy a few things from the movie, a flashback Luke and Leia, probably a new Palpatine, that the movie wasn’t even mentioned is surprising. Unless Hasbro plans on moving on. They should know best how well sequel based toys have sold, maybe they will move on and not look back.

Either way today’s presentation was very lackluster, even a fantastic Black Series Snowspeeder can’t cover up the fact that almost nothing new was revealed. The Black Series Empire Strikes Back line is mostly repaints and repacks. And some other all new lines, like the Battle Bobblers are real headscratchers.

Hasbro said they would reveal more throughout the year at various cons, so there is hope. More will certainly come. Hasbro will want something for the holiday season this year.

If you asked me I would say that the lack of all new figures has something to do with the unclear licensing situation (remember, the new deal was only announced on Friday!) plus maybe the not expected overwhelming success of The Mandalorian.

If Hasbro is smart they should absolutely focus on The Mandalorian and on The Clone Wars for the second half of 2020, if possible. Mandalorian toys in time for the holiday season could be a huge success. That show is a treasure chest of toys. Same goes for The Clone Wars. We should get a Bad Batch set of Clone Troopers. Season 7 Ahsoka is needed as well. The two shows are literal gold mines when it comes to toys, Hasbro merely needs to mine it. That they haven’t done so now doesn’t mean they won’t later this year.

And going beyond 2020, I think Hasbro should focus on The Mandalorian, The Clone Wars, the new Kenobi show and fill in some gaps, especially Rogue One, which is the one movie collectors are enthusiastic about. And of course the OT and PT are always welcome options for any toyline. So even without new movies Hasbro would have more than enough entertainment to choose from, even all new entertainment, to make Disney happy. They just need to start developing all the Mandalorian and Clone Wars toys fans are vehemently asking for!

So what do you think? What do you think Hasbro’s strategy is? Focus on ESB for the first 6-9 months of 2020, to then move on to The Mandalorian / TCW? Or is everything more haphazard and they have no idea what they should be doing? I find that hard to believe though. Hasbro can’t be so ignorant to overlook the huge demand by collectors for more Mandalorian and Clone Wars toys. In both scales.