What Are Your Expectations For The New York Toy Fair?

In less than two weeks the Toy Fair in New York will be upon us! Hasbro has an event planned, of course. As you can see in the teaser image below Hasbro plans on revealing new toys for several brands, including the all new Ghostbusters toyline. But what do you expect for Star Wars? Click through for a short discussion! 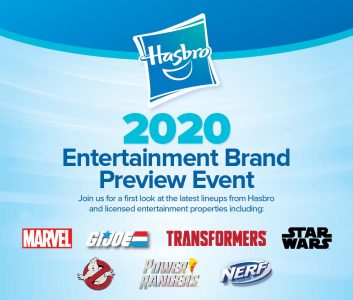 We do know a few things about the Star Wars toyline in 2020. The Black Series will get an Empire Strikes Back vintage line, we know the upcoming Black Series figures coming later in spring, including Baby Yoda toys. The Retro Collection may return. Not that much is known about The Vintage Collection though.

So what do you expect Hasbro to announce and reveal at Toy Fair?

In my opinion it would make sense for Hasbro to focus on the current Disney+ shows. That means The Mandalorian and upcoming The Clone Wars. Both shows are fan and collector favorites. Toys based on these shows could and should do well. Hasbro should only offer a select few toys from the sequels. The sequels are the past and let’s face it, many collectors have little interest in sequel based toys.

Of course there are a few gaps that need to be filled or a few select action figures many collectors would like, Flashback Luke and Leia for example, maybe an Emperor, but not that much more needs to get made, in my opinion.

I do think we will get a few figures based on The Clone Wars, a few more things for The Mandalorian, but I also think that Hasbro will probably not go as deep as many collectors would like. And we’ll probably get a few sequel trilogy toys as well.

But the one big question is if Hasbro will keep the license and still make Star Wars toys in 2021. Maybe the number of revealed toys will give us a hint. Will there be an announcement about the future of the license at Toy Fair? The license expires at the end of the year. Not much time left to announce something. Toy Fair seems like a perfect opportunity here.

So what do you think Hasbro will reveal?

Next Article: Yeah, Like This Walmart Will Ever Get The Latest Wave Of TVC Figures....