The Black Series 6″ “White Box” figures to support the release for The Rise Of Skywalker appear to have been canceled. Entertainment Earth, who was taking pre-orders for the chase figures, is now sending out emails to those who pre-ordered, alerting them that Hasbro has canceled the case assortment. Let’s hope they don’t cancel those TVC Rogue One Imperial Stormtroopers next! Special thanks to friend Steve U. for the alert! 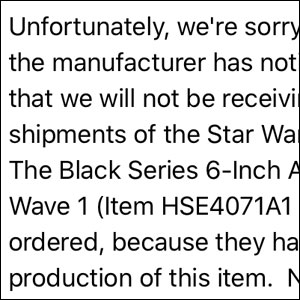