Earlier this week I asked you to rank all the live action Star Wars movies. Most of you even followed the rules and listed all 11 of them! And now the results are in! So click through to find out how you ranked the movies!

And the winner is…

There were 193 votes that I counted. A few didn’t list all the movies (some of you are rebels, aren’t you…), but I still counted the vote if only one or two movies were missing or so. In this case the missing movies got “0” points. But only six people couldn’t be bothered to list all 11 movies. And in each case they didn’t list a Disney era movie.

And here are the results: 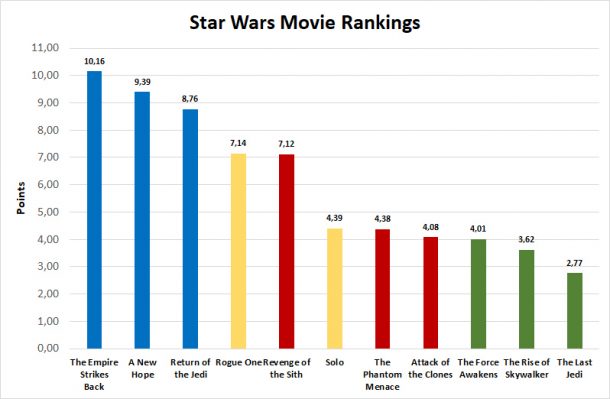 But what about The Rise of Skywalker? Overall, this movie is in 10th place only.

And once again Rogue One proves to be the most popular Disney Star Wars movie, by a wide margin, it’s not even a contest.
Revenge of the Sith is the most popular prequel movie, on the heels of Rogue One, it was a close race between the two.
What may be surprising is that Solo ranks higher than any of the sequel trilogy movies. I didn’t necessarily expect that.

To illustrate the huge difference in popularity between the trilogies here are the total points for the three trilogies: 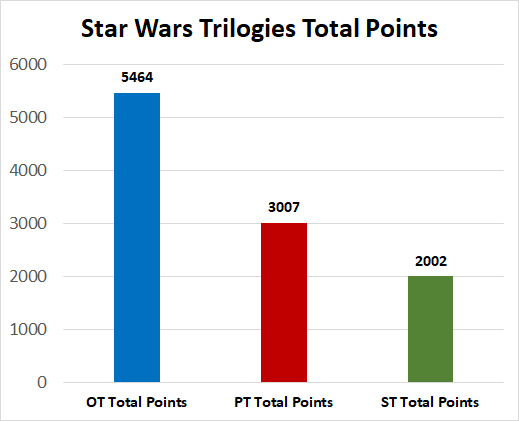 Once again, to the surprise of probably nobody the original trilogy proves to be the most popular one here on JTA. The prequels follow and the sequel trilogy is least popular.

But let’s look at the results in more detail, what follows is the points distribution for each movie, please click the chart to see the full version: 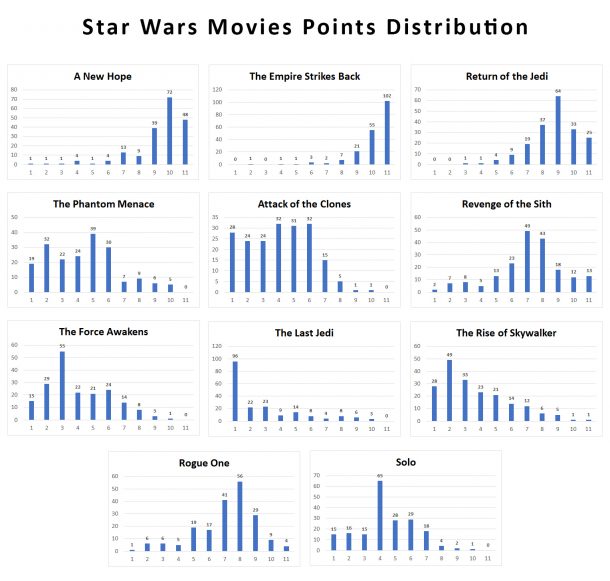 Points distribution for each movie (please click to enlarge)

We find some interesting things here.

When you look at the standard deviation, i.e. how much the points “fluctuate” around the average value, you find that The Last Jedi is the most polarizing movie, it has the highest standard deviation. Almost 50% of people had The Last Jedi in last place on their list. Only 21 people put in the upper part (better than #6) on their list. The least polarizing movie is The Empire Strikes Back, more than 50% of people voted it their #1 movie and less than a handful had it on the bottom part (worse than #6) on their list. The most polarizing prequel movie is Attack of the Clones with a wide range of ranks.

These movies made it to #1 on at least one list:

The following movies never made it to the #1 spot on anyone’s list:

And these movies had no #11 (last place) ranking

One person actually put A New Hope in last place on their list. Please report to the JTA office! We need to have a chat!

How representative is the list? Of course the results only reflect the opinion of people who frequent JTA and then only of those wo cared to leave a comment.

When you compare the results with the user scores on IMDB you find that there is one huge difference. On IMDB the sequel movies are much more popular. The Force Awakens is in 4th place on IMDB, followed by Rogue One and Revenge of the Sith. And The Phantom Menace and Attack of the Clones are the least popular movies (both have a 6.5 on IMDB).

This may be yet more evidence that hardcore fans view the movies somewhat differently than more general audiences. This is nothing new, of course. General moviegoers are not as passionate about something as hardcore fans, so views are expected to differ somewhat. Also, most of the votes on IMDB are from the time of the movie release, perhaps things would be a bit different if people voted again in 2020. The Force Awakens had a lot of good will back in 2015, for example.

Since no new movie will come out in the next three years the earliest we will do this again is in 2023. See you around then! And thanks for voting!