The Star Wars Series That Never Was

You certainly know of “Star Wars Underworld”, the Star Wars tv show that was announced more than a decade and a half ago. 50 scripts were written but ultimately the show was put on indefinite hold when it was decided that filming the scripts would be too expensive with the current technology they had back then. So George Lucas wanted to wait for the tech to improve. And while it’s not new apparently, filmed test footage of “Star Wars Underworld” has now appeared on YouTube. It’s a copy of two videos on Vimeo, spliced together, so maybe some of you have already seen it, but I was not aware this footage even existed. So click through for a closer look at the Star Wars tv show that never was. 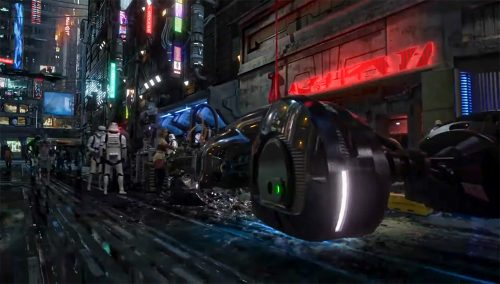 Here you can see the 10 minute video. First, you see the completed test footage, with all the effects and some basic (temp) music. This scene is 5 minutes long. And then you get to see the same again, but this time as a making of. You will see that they had some early version of in camera pre viz / in camera effects a decade ago, so that the director can see on set what the finished scene will look like.

With The Mandalorian they perfected this tech, The Mandalorian uses Unreal Engine and some innovative LED panels instead of just a green screen to not only have a virtual set, but also to provide accurate lighting. The LED panels can recreate any mood you want. So, in short, if Lucasfilm wanted to make Star Wars Underworld now, they would finally have the tech to do it. Back then George Lucas said each episode would cost about $50 million to make (in 2010 dollars). One episode of The Mandalorian costs something between $12 – $15 million.

So here is the test footage:

As I said, this is not new footage, it’s actually been around for close to 10 years, but this is the first time I see it. And for its time the virtual Coruscant looks actually quite nice.

Do you think Star Wars Underworld would have worked back in 2010? Based on what you see in the test footage?

And would you still like an Underworld Star Wars series on Disney+? Set in the time of Imperial rule, between Revenge of the Sith and A New Hope? Maybe the Cassian Andor show will be something like this. But we still don’t know anything about the setting. Will Coruscant (or any other non desert planet) even be featured? It would certainly be a good opportunity to go to some more civilized and populated places, instead of being in the Outer Rim all the time. The Disney era has – so far – completely avoided the Core Worlds. Seeing Coruscant in this old test footage once more illustrates what potential it could have to set a show on a populated planet like Coruscant.