This last weekend I was able to attend two different toy shows, and an additional collectible store in Phoenix. Since I moved, I haven’t been able to go to collector stops near as often as I used to because I live so far away, so it was a real treat being able to attend this weekend. Check out my small haul after the jump!

Here’s a group shot of the Star Wars figures I obtained this week at the toy conventions today, as well as a group photo of all of my Solo figures that I put on my shelf this week. (click to enlarge photos) 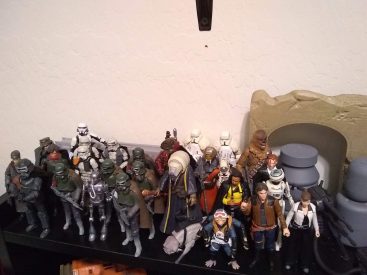 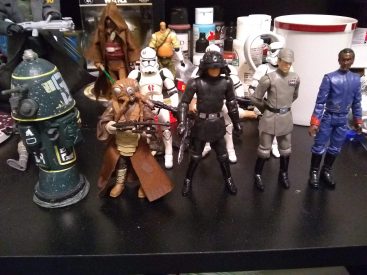 As you can see, there are a few custom figures mixed in with the Hasbro Solo releases. I still long for a TVC Mudtrooper, and plenty of other background droids from the movie. I do have several 3d printed ones that are in my box of customs to be finished, so they’ll get added to the shelf when they are done.

The photo on the right is the new Star Wars toys I got over the weekend. Of the 8 figures, only 2 will not be sacrificed for customs: Zuckuss (the last bounty hunter from ESB that I still needed), and Needa (although I might still swap heads on him). The droid, cloud city guard, stormtrooper, and death star trooper will all be used for figures from The Mandalorian. The two clones in the back will be used for Rex’s squadron (probably Dogma and Kix).

How was your week in Star Wars? Any new additions to the collection? Let’s see in the comments!

Next Article: JTA Presents: The Power Of The Force "2" Silver "Jubileap" Celebration!