A Look At The Episode IX That Never Was

You probably heard about the leaked Episode IX script that was originally meant to be filmed by Colin Trevorrow – Star Wars Episode IX: Duel of the Fates. The story would have been very different if that movie had ever seen the light of day. Rey would have still been a nobody and Luke would have had a more active role. Kylo would have been killed in the end by Rey, he was irredeemable. No Emperor was involved. And now concept art from the early Episode IX version has surfaced! Click through for a look at the Star Wars movie that never was!

I will not talk about the leaked script in all that much detail here, I will post a link to the Reddit thread and the original source video that will tell you everything important about the script at the end of this article.

“Duel  of the Fates” would have been more of a sequel to The Last Jedi than The Rise of Skywalker was. As mentioned, Rey was a nobody still, Kylo found the old teacher of Palpatine (an all new character created for the movie!) through a Sith Holocron he discovers in the ruins of Vader’s castle on Mustafar, the mysterious Tor Valum. Rose had a more prominent role and the script had parallel threads, with Rose and Finn going to Coruscant eventually where they want to broadcast a message by Leia throughout the galaxy, while Rey, assisted by the Force ghosts of Luke, Obi-Wan and Yoda, would have faced Kylo. Kylo was irredeemable in the script. There was no romance. And still no Anakin. Shortly before Kylo died he would have revealed to be the killer of Rey’s parents, Snoke ordered him to do so.

And now concept art has surfaced that shows a very, very different Episode IX. In some ways the movie probably would have been a lot better than what we eventually got when Trevorrow was fired and JJ Abrams took over from him.

This is the mysterious teacher of Palpatine, Kylo meets him early in the movie. This is a new character created for the movie, so it’s not Darth Plagueis the Wise.

In a scene mirroring the Cave of Evil in The Empire Strikes Back Kylo eventually encounters a vision of Darth Vader while being with Tor Valum and loses the duel.

Rey’s Episode IX look apparently took several cues from Luke’s appearance in Return of the Jedi. In the movie Rey also has a new lightsaber, a double bladed lightsaber converted from her old trusty staff.

Coruscant would have been a prominent location in the movie. It is occupied by the First Order. Coruscant would have been a shadow of its former self, with its citizens scavenging the ruins and First Order structures simply built atop of the old art deco buildings. Rose and Finn go there on a mission with the droids, instigating civil unrest that culminates in a major conflict.

Rey is trained by Luke (click for larger version)

In the movie Luke would have continued Rey’s training. 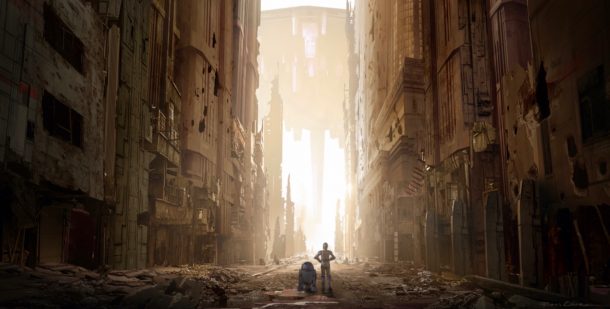 C-3PO and R2-D2 on Coruscant (click for larger version)

C-3PO and R2-D2 walk the ruined streets of Coruscant. 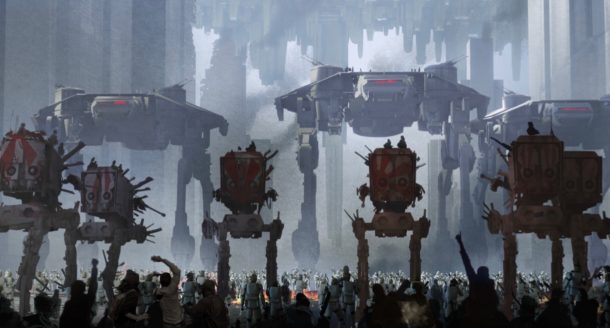 Defected stormtroopers and citizens of Coruscant face off the First Order, they are using old repainted Imperial walkers against the massive First Order walkers.

During the uprising on Coruscant R2-D2 gets destroyed, C-3PO is grief stricken. Chewie takes R2’s scorched shell onto his back.

Once it became clear that the First Order is losing the battle of Coruscant Chancellor Hux would have committed suicide with a lightsaber. Certainly a more fitting end to Hux than being a traitor for petty reasons and eventually getting blasted to death unceremoniously.

Leia recording her message to the galaxy (click for larger version)

Here we see Leia recording her message to the galaxy which Finn & Rose later try to broadcast through a beacon on Coruscant.

In the script both Kylo Ren and Rey go to Mortis, yes, that Mortis from the Clone Wars. On her way Rey encountered some huge beast. 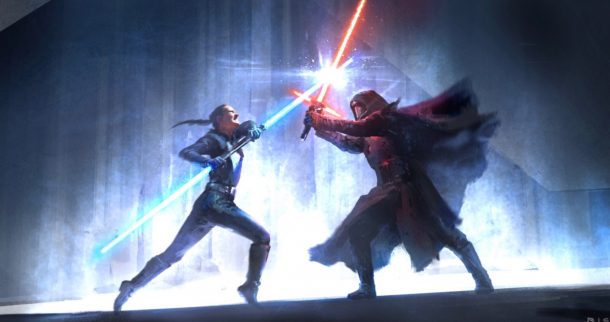 Rey and Kylo duel. You can see Kylo’s new mask here. As seen before, Rey’s look is very much inspired by Luke from Return of the Jedi. Kylo gets eventually defeated in the duel with the help of Luke, Obi-Wan and Yoda. The three Force ghosts try one last time to save Kylo from the dark side, but he is irredeemable and gets killed.

Luke blocks Kylo’s lightsaber here. With his bare fist. The things that could have been and never were….
In the movie Luke also talks to Kylo from time to time, making good on his promise to “see him around”.

While it’s always difficult, especially for us who have to rely on second hand reports (the leaked script has been verified as 100% genuine by various sources!), the Trevorrow version of Episode IX did look really great in the concept art and could have been a more fitting conclusion to the Skywalker saga perhaps. Seeing Coruscant again would have connected to the prequels as well.

But then again Rey being a total nobody was always problematic, in my opinion. However, the script appears to be a true continuation of The Last Jedi and doesn’t undo any of its major decisions. Maybe that’s why Disney decided to not go ahead with this project, as it’s evident that Disney/Lucasfilm were determined to course correct after The Last Jedi, which resulted in The Rise of Skywalker, a movie that more or less undoes everything The Last Jedi set up. Also, it’s easy to see why things like “Mortis” would have been considered too obscure for mainstream audiences. And it would have been difficult to create Leia’s scenes in the movie without resorting to CGI.

We will probably never see the actual script (unless someone finally uploads it somewhere). Lucasfilm will probably never release a Legends book based on Trevorrow’s script, we’ll never get an (animated) movie based on the script either. But I have to say, I would be very, very interested in seeing the Episode IX that never was.

General consensus seems to be that this script would have made for a better movie. But this movie certainly would have angered some people as well, since there is no “Reylo” at all in this movie, no romance, no redemption and R2 might have been killed.

So, how do you feel about the things you see here? Would you have liked to see Trevorrow’s Episode IX? Or do you think The Rise of Skywalker was the better choice in the end?

You can see some more concept art here.

And this is the (lengthy) Reddit thread with the Colin Trevorrow script summary!

This is the original (2h16min!) video by Robert Meyer Burnett who has the script and reviewed it on his YouTube channel.

Next Article: Check Out the First Carded Images of the New TVC Mandalorian Figures!!