The Rise Of Skywalker Joins The Billion Dollar Movie Club!

Tuesday was a very special day for The Rise of Skywalker! The movie crossed two thresholds at the box office! One positive and one not so postive! Click through for the details!

So happy you could cry

The Rise of Skywalker was the 9th movie released in 2019 to cross the one billion dollar worldwide box office threshold on Tuesday! This is an alltime new record, we never had 9 movies in a year that made more than 1 billion USD worldwide! Congratulations for this milestone! It’s the 46th (or 47th depending on what website you use as a source!) movie overall to join the billion dollar movie club!

It’s not decided yet if The Rise of Skywalker will climb the ranks a bit higher, the four week contract with Disney ends this Friday and after that movie theaters are allowed to remove the movie from their schedule. The Rise of Skywalker will probably lose a lot of theaters next weekend. Which is normal. However, it also means that most of the box office has been earned by now.

The next movies on the list are Aladdin with 1.05 billion, Joker with 1.068 billion and Toy Story 4 with 1.073 billion worldwide. It will be a very close race but The Rise of Skywalker may pass one, two or even all three of these movies in the next few weeks. Captain Marvel, with 1.128 billion USD worldwide is no longer in reach, however.

After day 26 of release The Last Jedi made another $44 million domestic and Rogue One made another $50.5 million domestic. The Rise of Skywalker’s daily performance is worse than both of these movies and it may end up making $505 – $515 million domestic. The movie then needs to make $536 – $546 million overseas to beat Aladdin, international box office is currently at $519 million. So chances are good the movie will beat Aladdin. I believe The Rise of Skywalker will beat Joker and Toy Story 4 as well and be the number 6 movie worldwide for 2019, behind Captain Marvel.

However, The Rise of Skywalker also crossed another threshold on Tuesday. It fell behind Rogue One at the domestic box office! It’s now trailing Rogue One by about $300,000. This gap will widen in the next few weeks. Unless Disney releases a special edition similar to what they did for Endgame the movie will end up making about $505-515 million domestic. 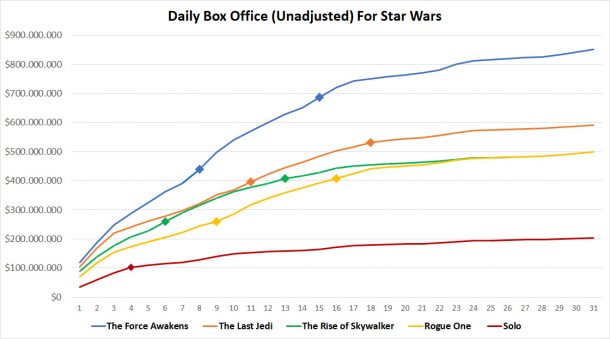 This chart will show you much better how the gap between the two movies  developed over the past few weeks: 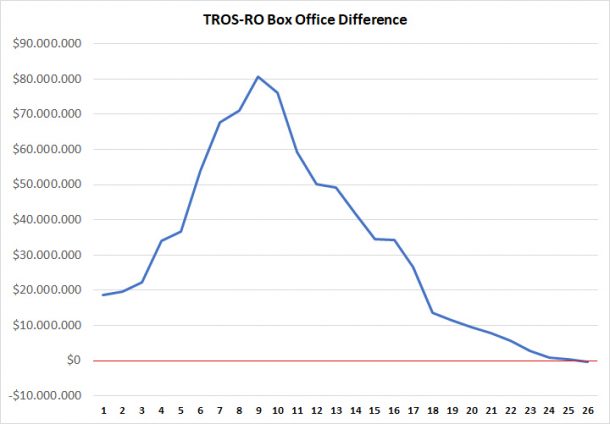 The Rise of Skywalker vs Rogue One

So The Rise of Skywalker’s admission into the billion dollar movie club is certainly somewhat bittersweet, because it will now be only the 4th most successful Disney era Star Wars movie at the domestic box office. It may still beat Rogue One worldwide, but only because of inflation.

The movie is profitable by now. Overall costs may be in the $400-$450 million range for the movie (including marketing).

I may report the final numbers once we have them in April or so. But not much more will change, most of the money has been made, the domestic box office race is decided, the only question left is whether or not the movie will climb to the #6 spot on the worldwide box office charts for 2019. We may not know until late February or early March.