Happy new year everyone! It’s already 2020 where I am. And here’s something to have fun with on January 1st after partying tonight! John Boyega is having a great time on Twitter. He tweeted this on December 31st: 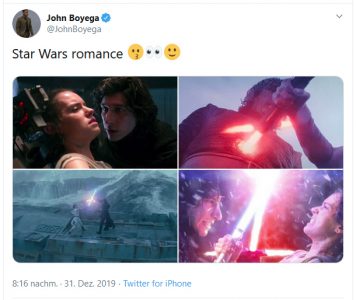 Apparently John is not the biggest Reylo fan in the world! Grab some popcorn and head over to the thread on Twitter… some responses by Reylo fans are really angry. And John Boyega is apparently having lots of fun with them. His responses are classy and hilarious. Maybe he was a bit drunk already, maybe he was bored and was looking for some diversion, either way, have a great time reading the comments on Twitter!