A Closer Look At The Rise Of Skywalker's Box Office

While opinion on The Rise of Skywalker seems to be once more split, with some people loving the movie, and others criticizing it, it’s maybe time to take a closer look at the box office again, the only objective measure we have for commercial success. We not only have numbers for North America now, but also the most important foreign markets. So click through for a detailed look at domestic and worldwide opening weekend box office performance, including some charts!

Rey may be rising, the box office does not

The general numbers for The Rise of Skywalker are good, seen in isolation the numbers are even excellent. It’s only in context that the box office results are lackluster and certainly somewhat of a disappointment for the franchise.

First, let’s see how The Rise of Skywalker compares to the other Star Wars movies at the domestic box office! 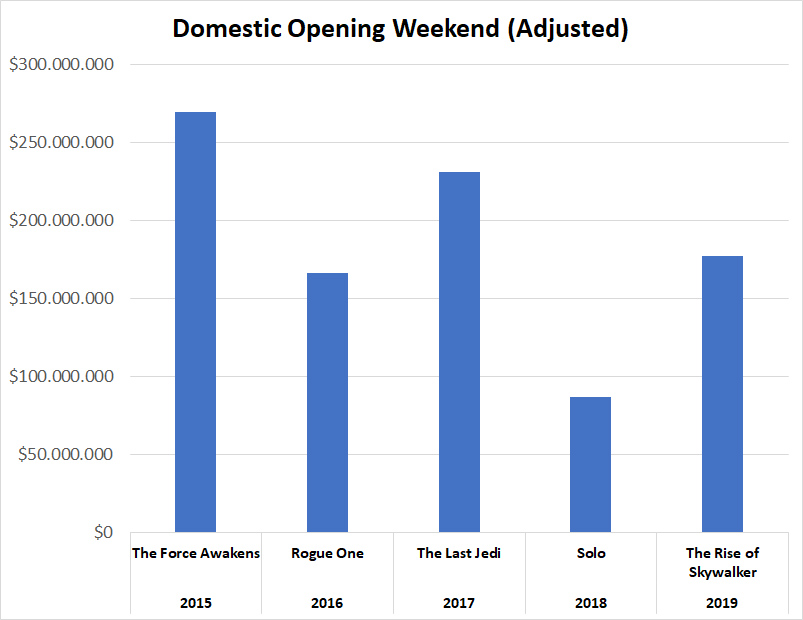 The Rise of Skywalker Domestic Opening Weekend (adjusted for inflation)

Here are the opening weekends for all the Disney Star Wars movies, adjusted for inflation to make things comparable. The movie sees an even greater decline from The Last Jedi than The Last Jedi saw from The Force Awakens.

The following graphic will illustrate this: 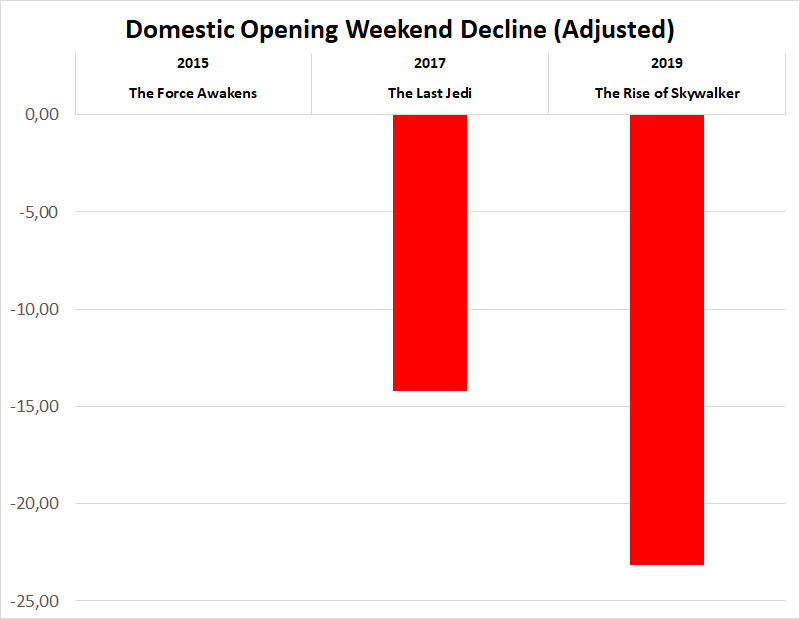 So even though some fans very much love the movie the overall box office seems to indicate that general audiences are not as much in love with the movie as they were for the previous entries in the sequel trilogy. The B+ cinemascore (the first live action Star Wars movie to only get a B+) seems to underscore this.

But let’s talk about worldwide opening weekend, and here we can see some interesting developments! 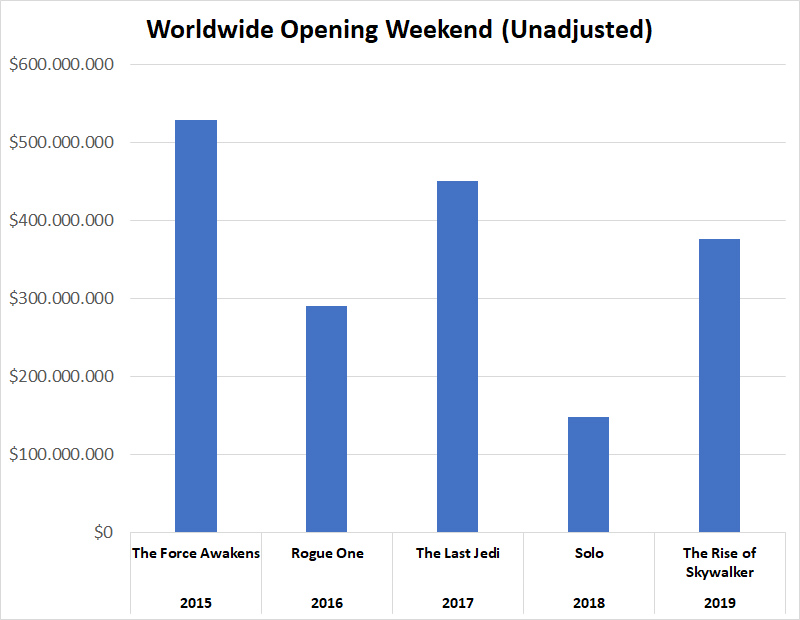 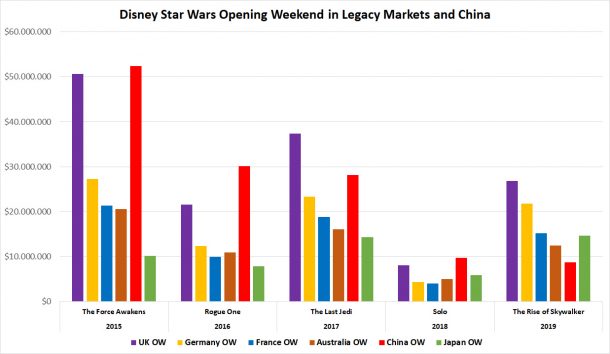 A few interesting things can be observed: The Rise of Skywalker is losing a lot in the UK and Australia, box office is relatively stable in Germany, when compared to The Last Jedi (a decline of about 2.6% only), box office completely collapses in China and the ONLY country where each movie in the trilogy made more than the previous on opening weekend is Japan. But these numbers are not adjusted for inflation, so The Last Jedi probably made a bit more, still Japan is stable, all the other legacy markets and China show a decline.

You can also see that Solo failed very hard in the foreign markets. Even so, its opening weekend in China was ever so slightly better! Note: the Chinese numbers exclude the previews and only count the 3-day weekend).

What’s bad for The Rise of Skywalker’s worldwide box office is the collapse in China. But the box office in the UK is even more troubling, compared to The Last Jedi box office declined by 28%. In Australia box office declined by 22%. The decline in the UK is troublesome, because the UK is usually the 2nd most important market for Star Wars movies, after North America. The more stable results in Germany and France cannot make up for the huge decline in the UK. You can see that the UK usually makes almost as much money as France and Germany combined. And now the results are barely better than in Germany, where people don’t go to the movies all that much, per capita attendence in Germany is rather low, much, much lower than in the US and UK.

If The Rise of Skywalker wants to make more than $1 billion it will depend on how much the UK may or may not recover and how the other legacy markets will do in the next few weeks. China is a total loss, expect almost nothing from there, the movie is  only expected to make about $18 million total. The other Asian markets will also turn a cold shoulder to Star Wars (especially South Korea as another market of note), so that means the UK, Germany, France, Australia and Japan will have to earn a huge chunk of the worldwide box office. These five markets alone accounted for 52% of The Last Jedi’s total foreign box office. All the other countries in the world accounted for less than 50%.

It will certainly be interesting to see what kind of legs the movie has.