JJ Abrams: "You Can't Look At Fans As An Adversary"

JJ Abrams was a guest on “Popcorn with Peter Travers” last Friday and he had a few things to say about Star Wars fans and criticism of his movies. Click through for a few quotes from the 25-minute interview! 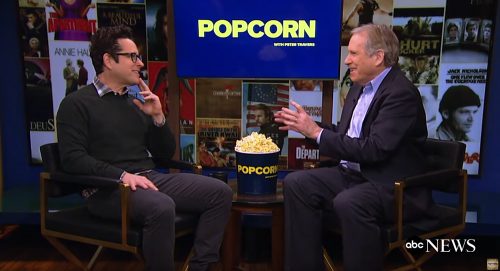 You can watch the episode of “Popcorn with Peter Travers” on YouTube, here’s the embedded video, it’s 25 minutes long:

The first quote is right from the beginning of the episode, after a little more than one minute:

“You can’t look at fans of Star Wars as an adversary. They’re passionate, and certainly can be contentious, but the fact they care — I feel like I, as a Star Wars fan, understand that love for the series. So I feel blessed to be involved in something that matters so much to so many people.”

After The Last Jedi both Lucasfilm employees and freelancers and some parts of the media made it seem as if “toxic Star Wars fans” dominate the narrative. For a while almost no week passed without some rant posted on Twitter that attacked fans who criticized The Last Jedi or articles discussing how toxic fans and Russian bots are the dominant regressive force of fandom.
While some people argue these attacks never included people who had genuine concerns about the movie, this distinction was seldom made during the various diatribes. And many fans felt genuinely attacked by Lucasfilm, their employees or freelancers. So even if they only ever meant to talk about a small minority, this message never really came across. So yes, for a while it seemed as if the (hardcore) fanbase that is critical was considered some kind of adversary you have to get rid of. But there has been a shift in the narrative in recent times, where fans who criticize the sequel movies are called “dedicated fans” or “passionate fans” in various articles addressing issues the movies have.

“Here’s how I feel. Every time I read something where someone is unsupportive — which is a kind way of saying ‘brutal’ — I kind of go, ‘Well, they’ve got a point.’ And whenever I read someone saying, ‘Oh, he’s the greatest,’ I’m like, ‘They don’t know what they’re talking about.’”

“I always feel like I sympathize with the people who have the sort of more negative things to say. So it’s not a pleasant thing to ever read something that’s negative, but I also feel like spirited debate is not a bad thing, and certainly, you can find some of that online.”

This is certainly a very healthy and even humble attitude. JJ is not new to fans being very critical, Star Trek fans can tell you a thing or two about that. But JJ is indeed not immune to criticism. He freely admitted that he went overboard with the lensflares in the first Star Trek reboot movie, to the point that even his wife teased him about it, and in subsequent movies lens flares were toned down.

JJ also admitted that it was a mistake to lie to Star Trek fans about Khan’s involvement in “Star Trek Into Darkness” and said he would not do that again.

Now whether or not you like JJ’s style of moviemaking is another thing, but he’s certainly not completely immune to criticism. And while some may think JJ is just saying these things to appease the Star Wars fanbase which had a rough last two years, you do get the feeling he is someone who is willing to accept feedback and even act on it.
JJ certainly heard all the criticism about The Force Awakens being a quasi remake of A New Hope. Maybe The Rise of Skywalker will be a new and refreshing experience and despite the leaks a fun experience on the big screen. Tonight is the world premiere in Hollywood. The movie opens on Wednesday in many parts of the world (come to JTA on Wednesday to read a 100% spoiler free first impression) and there are early screenings in the US on Thursday. So we will know very soon if JJ has to brace for more online criticism or if Star Wars fans will embrace his new movie.

Previous Article: What Is Your Star Wars Figure Of The Year 2019?