I had a pretty good week when it comes to collecting. I took a trip an hour south to Tucson, AZ, and went to a wonderful swap meet. Some of my favorite vendors had vamoosed, unfortunately, but there were still a couple toy vendors with decent Star Wars merchandise. I also watched A New Hope, The Empire Strikes Back, and Return of the Jedi, which marks the first time my son has gotten to watch the original trilogy (although he’s 2 so he ran around for a lot of it and went to be 3/4ths of the way through each movie, but boy did he like R2-D2!). In any case, click here to see a few photos of this week’s collecting finds!

First off, my flea market finds. I paid about $15 for all four of these figures. Thrawn will be used as a custom so I can give him joints. Unless Hasbro announces they are making one any time soon (I know he’s “on their radar”). I’ve wanted that Maul for some time, so I was excited to get it for such a steal! 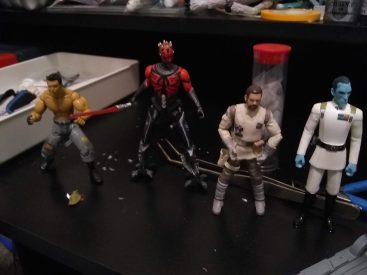 One of these things just doesn’t belong here…

I also finished a Mandalorian custom for a friend of mine who traded a bunch of 3.75″ stuff to me. The cape is magnetized on to the shoulders, a detail I was quite happy with. 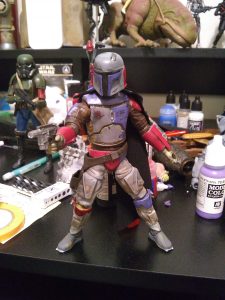 That’s all for me this week, folks! Let’s see your week in Star Wars in the comments below!

Next Article: Walmart.com Sale On Star Wars Toys With GOA 50% Off