The Rise Of Skywalker - How Much Money Will It Make?

Estimating box office has become very important in Hollywood. They usually know a few weeks or even months in advance how a movie is going to perform. Various sources are used, social media, trend data and trailer views, to name the most common sources. JTA regular 80sRobot posted a few estimates of his own in the comments recently, based solely on YouTube trailer views. A recent study by a tracking company has found that YouTube trailer views are a predictor for box office success, to a certain degree, so this seems like a valid approach. Based on this I thought it might be fun to see if we here on JTA can make our own estimates about the success of The Rise of Skywalker at the box office and took a closer look at YouTube trailer views and box office success. Spoiler: The Rise of Skywalker will most likely perform worse than The Last Jedi. Why? Click through to find out! 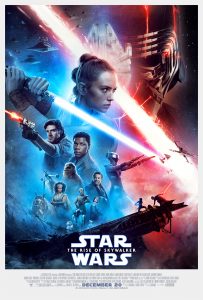 How much money will it make?

There is a short summary at the end, I know you hate too many words… but maybe you want to at least look at the two plots and the bold parts of the text!

Disclaimer: this is mostly for fun. It is most certainly not 100% scientific. My method was as follows: I looked at 75 movies from 2015 – 2019 and compared YouTube trailer views, domestic opening weekend at the box office and total worldwide box office. I adjusted all dollar values to 2019 dollars. I sampled  movies from the top, middle and bottom of the top 100 grossing movies from each year.

With the data I gathered I performed a rather simple linear regression. And I examined if the YouTube trailer views are in any way correlated to box office, both domestic and total worldwide.

Let me show your the two plots I got, they visualize the data and you can easily see for yourself if there is a correlation or not: 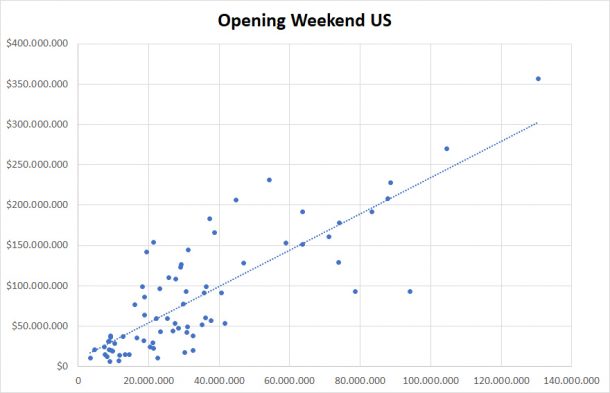 Correlation is 0.81, which means there is a strong correlation. But you can also see that there is quite a bit of variance, the data is either above or below the line. The coefficient of determination, R squared, is an indicator for that, it’s simply the correlation value squared. R squared is 0.66.

In plain english: the YouTube trailer views can explain about 66% of the domestic opening weekend box office variance. That means that other factors influence domestic opening weekend box office as well, by about 1/3. And it’s easy to see why that is: a movie may get a lot of trailer views, but many people find they simply don’t like the trailer or the movie, and thus a movie with a lot of trailer views doesn’t have an equally impressive box office. One prime example is Justice League here. According to trailer views the movie should have fared much better at the box office. But trailer views alone don’t tell you anything about what people think of it. It appears quite a few people didn’t like the trailer at all and decided to stay home.

Also, fandom is another factor, how dedicated are the fans? How many times do they rewatch trailers? MCU movies are usually overrepresented on YouTube, which means their trailers have a lot more clicks than other movies that perform about the same at the box office. Captain America Civil War, for example, had almost as many trailer views as Jurassic World, but Jurassic World had the better opening weekend in the US and did much, much better worldwide.

And here is the plot for total worldwide box office and YouTube trailer views: 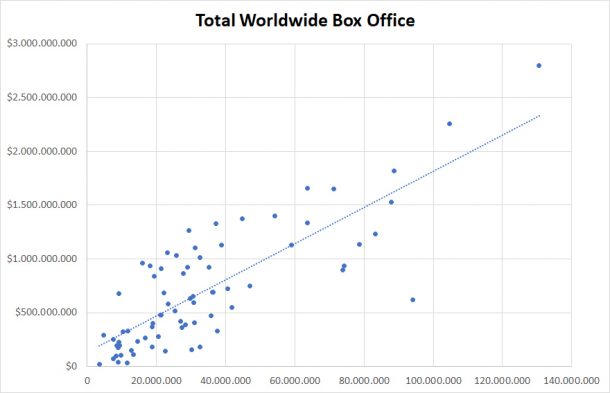 Correlation is a very strong 0.81 once again, R squared is 65%, so YouTube trailer views can explain about 2/3 of the worldwide box office variance, but as with the domestic box office the same additional factors influence the final results as well.

One interesting observation here is Black Panther. It has, by far, the fewest YouTube trailer views of the huge blockbuster Marvel movies I looked at, and here I mean the official trailer posted on the Marvel channel. But the movie did fabulous at the domestic box office. However, worldwide the movie didn’t do all that well. It only made about $660 million outside North America. Infinity War, which was only the #2 movie in the US, made more than $1.3 billion outside North America and outperformed Black Panther worldwide by a huge margin. Looking at the YouTube trailer views this is not a surprise anymore. International interest in Wakanda was not all that high. And even though YouTube has local sites as well, many people apparently still go to YouTube.com to watch trailers.

Another thing is that for some reasons family movies, animated movies, usually have much fewer trailer views, but still have very impressive box office numbers. Since YouTube skews mostly male and mostly adult this may be no real surprise either.

So what about Star Wars? The multiplicator for domestic box office for the four Disney movies ranges from 2.58 for Force Awakens to 4.59 for The Last Jedi (both Rogue One and Solo have almost the same multiplicator as TLJ!).

Worldwide box office multiplicator ranges from 21.24 (Solo, with TFA having almost the same value) up to 29.14 (Rogue One).

Using the formula derived from the linear regression The Rise of Skywalker  may underperform, or at least perform worse than The Last Jedi and maybe even Rogue One.

If we look at the multiplicators for the Disney Star Wars movies then The Rise of Skywalker could expect $160 million maximum.

Going by the previous performance of Disney Star Wars movies the range is $130-$173 million.

$175 million was the lower end of the official estimates by tracking companies.

And there is a 95% probability that The Rise of Skywalker will not make more than $1.37 billion worldwide (2 standard deviations). Which would put it on the same level as The Last Jedi, at best. But if would have to be an outlier already to achieve that. Based on the trailer views.

Let’s look what the regression formula will yield for all five Disney Star Wars movies, the expected average and 1 standard deviation. This may tell us even better what to really expect for The Rise of Skywalker.

Expected average according to regression model:

Let’s look at the numbers: of the four Disney Star Wars movies released so far 3 performed above the average of what you’d expect based on YouTube trailer views. Remember that most MCU movies usually perform below average, which results in a model with some variance. We can also see that of the four movies released so far, Solo is the one movie that is a very good fit to the model and that the three other movies are an almost perfect fit within 1 standard deviation.

And if we just look at the multiplicators for Disney Star Wars movies, then The Rise of Skywalker may once again barely scratch the $1 billion mark worldwide and perform worse than both Rogue One and The Last Jedi.

Now, don’t take any of this too seriously. There is still a lot of uncertainty. But one thing cannot be disputed: both trailer views and trend data on Google for The Rise of Skywalker are very low, compared to previous trilogy movies and even Rogue One. The question is if this lower than expected online interest will have an actual effect on the box office.

According to the more rigorous study by a tracking company and a more fun study by me then yes, online interest, and here trailer views, are absolutely a predictor for overall box office success. On average a movie with more trailer views will make more money at the box office. The reason for that is very simple to see. If people are interested in something they will check out the trailer. If they are not interested they won’t.

For The Rise of Skywalker to outperform both Rogue One and The Last Jedi something must happen. The movie needs to be an absolute outlier on Google and YouTube to perform on the same level as The Last Jedi. One hope may be that previously hardcore fans watched the trailers many, many times, thus inflating the numbers, but that the unique number of people watching the trailer is still about the same, so that The Rise of Skywalker will perform more or less on the same level as The Last Jedi perhaps.

But if the very low trailer views and weak trend on Google are an indicator of actual lack of interest then the movie is most likely to underperform. In almost two weeks we will know for sure. Based on the data we have and what we know Disney should not be surprised at all if The Rise of Skywalker will be the lowest grossing sequel trilogy movie, and may even perform worse than Rogue One worldwide.

Thanks again to 80sRobot for his work in the comments! He crunched quite a few numbers of his own!

Summary: according to my estimate, based on YouTube trailer views, The Rise of Skywalker  is likely to make $721 million – $1.04 billion worldwide. Opening weekend could be anything between $130 – $173 million. Unless The Rise of Skywalker is an absolute outlier on YouTube among Disney Star Wars movies it has a high probability of being the least successful sequel trilogy movie, it may even perform somewhat worse than Rogue One.
All provided the YouTube trailer views and other trend data are a predictor for box office success. And a study by a tracking company and my own (much less rigorous) work show that yes, YouTube trailer views DO predict box office trends. The more views a trailer gets, the much higher the chances of a movie are of having a great box office as well. And The Rise of Skywalker is lagging the other two trilogy movies, as well as Rogue One, leaving only Solo behind. For it to be as successful as The Last Jedi it needs to achieve something no other Disney Star Wars movie has achieved so far, it has to outperform the expected box office based on trailer views by a lot more. Word of mouth will certainly be a major factor here and tip the scales either way.