Comparing A New Hope And The Mandalorian

Chapter 5 of The Mandalorian takes the hero and Baby Yoda to Tatooine (we knew that from the posters and various trailers already). I thought it would be fun to compare The Mandalorian’s Tatooine with what we saw in A New Hope. I also take a look at color grading and what has changed here since 1977. So click through for a few comparisons and to see how faitfhfully the show managed to recreate the planet. Very mild spoilers may apply, so people who don’t like even the mildest of spoilers (basically, just set pieces from the first 5 minutes or so from the show) should only click through once they have seen the episode! Everyone else, please go ahead to take a look at Tatooine 1977 vs 2019! 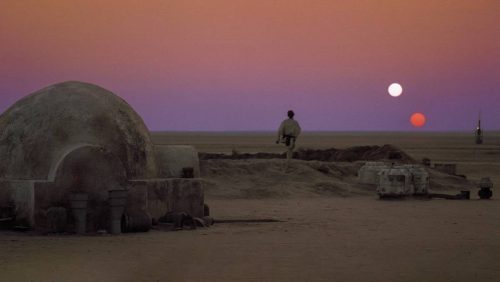 Scene from A New Hope

So, the Mandalorian visits Tatooine. But how does 2019 Tatooine compare to 1976/77 Tatooine? With actual filming on location vs a studio backlot and CGI?

Let’s take a look! First, there’s the establishing shot of Tatooine… please click the images for full resolution and then further expand the images, or else details will be a bit too small too see!

To the left we have A New Hope, to the right is the scene from The Mandalorian.

The planet and the two moons are identical, by that I mean each and every detail is identical. However, the starfield is very different. Now I don’t exactly recall how they filmed that scene back in 1977, that is, if the matte painting for the planet and moons and then the starfield were a composite. But since I find it unlikely that The Mandalorian used the actual matte painting from 1977, I think they either faithfully recreated the planet in CGI, the planet even has a somewhat handpainted look, or they didn’t spend as much money on CGI and scanned a frame from the movie and merely added new stars and enhanced everything with a bit of CGI on top. For extra brownie points they should have also recreated the exact star formations, but that is certainly a detail almost no fan would notice.

The approach to Mos Eisley, part one. Once again, A New Hope is to the left, The Mandalorian is to the right, in case you didn’t notice his ship in the frame.
Now this is tricky. They either used an actual frame from the movie (and removed the actors and added a new sky) or they actually recreated the entire rock formation in CGI. The rocks are 100% identical. And while the shadows in the Mandalorian episode are much lighter (there’s much less contrast overall) they are identical as well.
So I would think they used actual footage from A New Hope and enhanced it (adding 3D with a displacement map, the same tech they use to add depth to 2D photos in documentaries) so they could add a slight panning movement and make it look as if the perspective is slightly changing. Or they spent a lot of money recreating the entire rock formation in CGI, without changing a single detail, all the pebbles, rocks and shadows are in exactly the same place as in A New Hope. I would say that possibly a frame from the movie was used as the foundation for some post production enhancements (adding perspective etc).

A New Hope is to the left, The Mandalorian is to the right. This is difficult… while the landscape is identical, as in, it’s the same mountains and general formations, it does look a bit different here and there. There are almost no shadows in the Mandalorian footage, it’s also much more hazy. Also, the camera in A New Hope was stationary, but for The Mandalorian there’s a slight pan of the camera. My guess is that once more the original footage was used and enhanced with CGI. You can easily adjust levels (shadows) in post. It would certainly be cheaper than recreating the entire scene in CGI. Of course, there’s also the option that they sent a lone cameraman to Dante’s Peak in Death Valley to shoot some on location footage in the exact same spot the camera was located in back in 1976 at the exact same time of day. My money is on original footage and added CGI instead of 100% CGI. Either way, they spent a lot of effort to recreate scenes from a New Hope in the first few minutes of the show.

The physical set of Chalmun’s cantina looks unchanged, other than for what you’d expect would change since the last time Luke went there. Even the broken dish structure is still there. You can also see that the Mandalorian goes for a much more desaturated look here, the original is very warm and colorful, the Mandalorian scene looks very desaturated in comparison and much cooler.

They also quite faithfully recreated the interior of the Cantina. The original is once more much more contrasty, and somewhat darker. The bar basically looks the same though, including the IG-88 Rolls Royce engines used as props.

But the place has certainly seen better times, it was packed back in Luke’s day and in the time of the Mandalorian it’s basically an empty place. Maybe it was a bad idea to hire droid bartenders after all.

I also checked if Toro sat in the same booth as Han. I don’t think the did, I believe he sat in the booth to the left of where Han shot Greedo.

Anyway, how did you like the Mandalorian’s version of Tatooine? It clearly shows that they tried their best to emulate A New Hope with (virtual) camera placements etc. It would be interesting to know if they actually scanned frames from the movie and then enhanced them with CGI or if they recreated everything from scratch with CGI.

The only thing visibly different is the modern color grading with basically very muted tones and much less contrast overall in most scenes. How would the Mandalorian look and feel if they had chosen the same color grading used for A New Hope? With today’s digital tools you can easily emulate (or come very close) to the look of film stock, even if film stock will always look a bit different.

A New Hope color grading applied to The Mandalorian (click for larger version!)

What version do you prefer? The muted approach used on the show on the left or an emulated A New Hope color grading applied to the same scene on the right?