New The Rise Of Skywalker Clips!

Check out the new The Rise of Skywalker Chinese movie trailer and official movie featurette! Both clips show brand new scenes and images. Anyone who wants to avoid spoilers should of course neither click through nor watch any of the trailers. You will see and read things you may not want to see and read! Anyone else please click through for some interesting clips and screenshots I prepared for you! 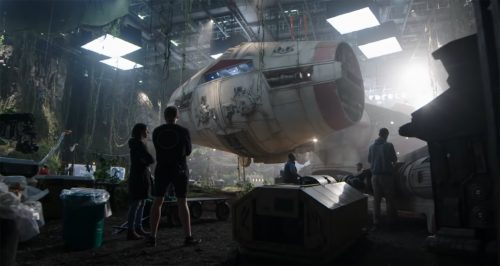 Here’s the very short Chinese clip with quite a few all new scenes we haven’t seen before!

And now for the screenshots and a short discussion!

Sith Trooper transports on their way to a Star Destroyer

Here we see the Sith Troopers in their transports descending.

And here the Sith Troopers disembark to greet the Resistance and their space horses. I still wonder why no TIE Fighters are launched. My guess is that the fight on the Star Destroyer is the only scene with Sith Troopers and that they are all quickly disposed of in true Star Wars fashion.

Poe is piloting the Falcon, which is not only pursued by TIE Fighters but also about to get eaten by some huge space monster!

Klaud is on the Falcon!

Our new favorite alien, Klaud, is on the Falcon, as it’s about to get swallowed whole… until the Falcon jumps into hyperspace that is and escapes the monster’s clutches (jaws) at the last second!

The Chinese trailer also features a few shots from previous trailers with updated VFX, like the Resistance fleet jumping out of hyperspace, they now color graded the scene so it’s consistent with the shots of the Star Destroyers and even added some lightning. Which means previous clips were sometimes featuring footage with really very rough and preliminary effects.

And now a few screenshots from the featurette! 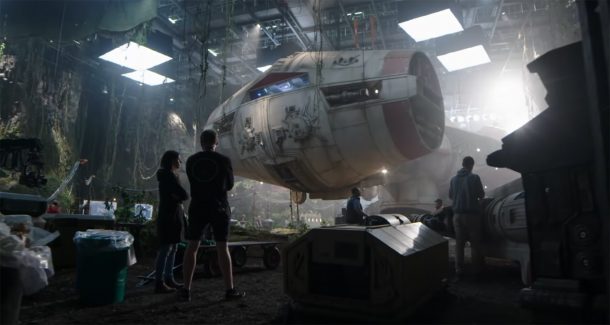 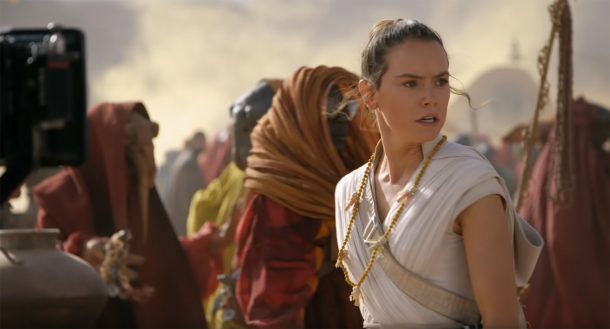 The Rise of Skywalker – Rey with necklace on Pasaana

In this behind the scenes shot we see Rey on Pasaana, wearing a necklace. She’s somewhat distressed for some reason. 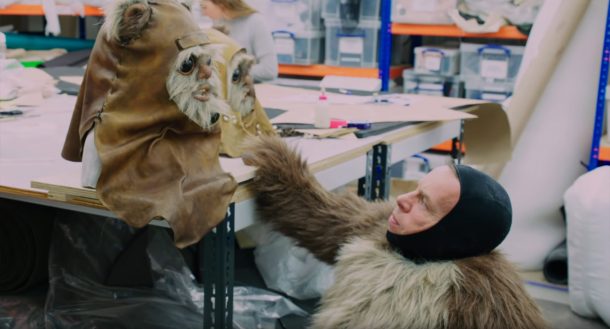 Now this is certainly a very interesting shot. This is Warwick Davis, but it’s not a vintage photo, it’s present day Warwick. And he’s wearing an Ewok costume. That begs the question if Wicket will make an appearance in The Rise of Skywalker. Endor is definitely in the movie, since we all know that the heroes go to the wreckage of the Death Star II on Endor. So a cameo would make sense!

And for those who are interested in the leaks, I will say this: the Falcon jumping through hyperspace, trying to run from the First Order and Rey wearing a necklace and feeling distressed on Pasaana are all in the Reddit leaks. With each new clip the leaks seem more and more accurate and real.

Please try to keep the discussion spoiler-free. If you want to have a spoiler discussion, say so and I will open a new thread where we can all share our thoughts about what the trailers validating the leaks may mean for the movie.