The recently released “They fly now?!?” The Rise of Skywalker clip once more proves that continuity means very little in Disney Star Wars canon. When Lucasfilm was bought by Disney the existing books and comics were relegated to “Legends” status (not that they ever really were canon to begin with) and a new policy was introduced: going forward every single book, comic and even the story parts of computer games would be canon. Which is, in theory, a good thing, if you want to convince fans of said books, comics and games that the money and time spent on these media is giving you real insight into what happens between the movies and not just something some author thought up but which has no real impact on actual Star Wars events.
The Story Group wanted to make sure it all connects. But first “The Last Jedi” and now even more so “They fly now” show that Lucasfilm’s canon policy is in ruins. Why? Click through for some background!

They fly now?!? – Yes, they have flown for ages

In the latest spot for The Rise of Skywalker both Finn and Poe Dameron act very surprised when Stormtroopers have jet packs and launch into the air.

However, even if you disregard examples of Imperial Stormtroopers using jet packs, as seen in Rebels most recently, because maybe that was lost to time, examples of First Order Stormtroopers using jet packs can be found in Disney Star Wars canon. Namely, in the Poe Dameron comic book series of all things, issues #2 and #3 which were released in 2016. And according to the official timeline, the events in the books predate The Force Awakens even.

In the comic Poe Dameron literally observes how First Order Stormtroopers use jet packs. And the fact the First Order used Jet Troopers even before The Force Awakens begs the question how Finn, a Stormtrooper back then, never even heard of these things. It’s like saying a private of the US Army, even someone who is stationed at some army hospital and has never been to a conflict zone, has never heard of the Navy Seals or jet pilots. It’s not as if the Jet Troopers were a secret, when they are used openly in the comics. 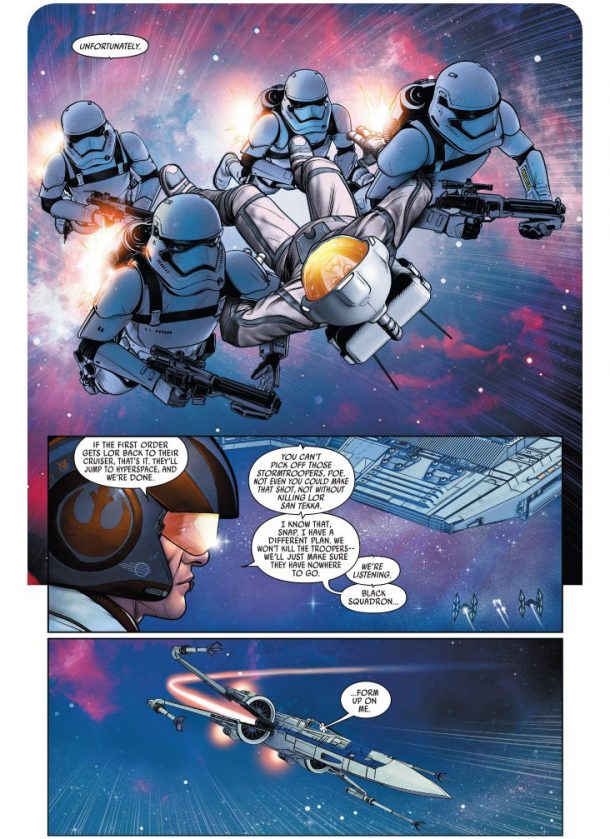 There are a few other scenes in the Poe Dameron comic in which Jet Troopers (wearing normal Stormtrooper armor, but that hardly matters here) are seen.

So what does that mean? It means despite claims that everything is “canon”, it’s only canon as long as a movie wants to have a joke or just wants to go in another direction. In other words: Disney Star Wars canon is not all that different from all the Lucas era books and comics which never really were canon either.

Which begs the question if it wouldn’t be better if Lucasfilm dropped the “it’s all canon” pretense and unshackled the imagination of writers and no longer made them adhere to a rule that hardly matters anyway when a movie can directly contradict said “canon”. It was bad enough with the Force Awakens novelization in which Poe Dameron meets Rey, only for him to meet Rey for the first time all over again in The Last Jedi, but you could argue the novelization was based on some early script or early edit which had scenes removed. But directly contradicting a comic is another thing. A comic which was written from scratch, under the “it’s all canon rule”.

The conclusion is that everything you read in Disney Star Wars canon material is only canon as long as a movie doesn’t contradict it. In short: it’s more or less the same as before, it’s not really canon at all.

Also, by making everything canon you limit the possibilities of future movies and series. You want to make a Disney+ series about Darth Vader during the Original Trilogy? There’s a comic for that! What do you do? Do you use the comics as your script? This is in many cases certainly not a good idea because chances are that someone like Jon Favreau or anyone else who is hired to write the series comes up with much better ideas than the comics did.

Releasing so many books and comics canon may eventually be an enormous burden on writers when you have a mountain of canon material to take into consideration when you want to write something new. And that will inevitably mean that sooner or later there will be contradictions. Now the general fan doesn’t care about that at all. But the hardcore fans who do buy said books and comics will maybe feel let down when they realize that what they thought was canon isn’t. It’s just legends material like anything else before if a movie or series says so.

What are your thoughts here?

Next Article: Entertainment Earth Doorbuster: TBS6 Dewback and Sandtrooper For $14.99