The Rise Of Skywalker TV Spots

Today and a few days ago two tv spots for the upcoming The Rise of Skywalker were released. Click through for a few screenshots of the new things that were shown, including a first look at actual movie footage of the Knights of Ren and Sith Troopers in action. Also, it seems JJ Abrams doubles down on a somewhat controversial scene from The Last Jedi, something for the Rian Johnson fans apparently. As a bonus I will show you a much better The Rise of Skywalker poster which is used to promote the movie in Germany, which even gives away a small detail not yet known (it’s no spoiler though). So click through! 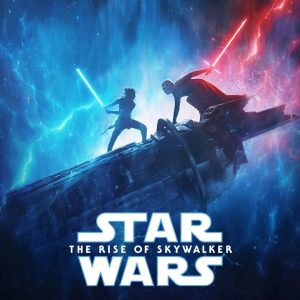 Here you can watch the first tv spot from a few days ago, which has the title “End”:

And this is today’s tv spot titled “Fate”:

“Confronting fear is the destiny of a Jedi”, Luke says. Aha! But he cut himself off from the Force, hid away on an island, abandoned friends and family and wanted to die from drinking too much space cow milk instead of confronting Kylo Ren and Snoke and his own inner fears. Well… Let’s proceed! Nothing to see here! So we move along!

Here are some screenshots from the spots!

The Rise of Skywalker – Knights of Ren

Well, at least they are actually in the movie and won’t pull a Zuvio on us! 😀

The Rise of Skywalker – Jet Trooper and Treadspeeder

The treadspeeder brakes hard, almost flips over, turning into some kind of mobile catapult, thus launching the Jet Trooper into the air. Ok! That looks…. plausible?

The Rise of Skywalker – Kylo Ren

Backstabbing Kylo Ren! So evil! Someone give him a hug!

The Rise of Skywalker – Sith Troopers

The Rise of Skywalker – Space Battle

The Resistance fleet is fighting against 10,000 Star Destroyers. I suppose the Resistance likes those odds! Also, it seems keeping the formation “tight” is the school of thought in the sequels followed by both the Resistance and the First Order, conveniently preventing the 9,990 Star Destroyers in the back from using their turbo laser batteries, unless they want to shoot each other out of the sky. Palpatine may be many things, a master space battle tactician he is apparently not!

And a bonus screenshot from the first TV spot:

The Rise of Skywalker – Rey Poppins

It seems Rey learned a few cool Force tricks from Leia, including how to fly through space. As you may notice the Falcon and the ramp are well outside the hangar force field of the Star Destroyer, which begs the question how Finn can survive in space, in a vacuum, which usually has very little air and no air pressure, about 0%, more or less. But let’s not dwell on such trivialities. (I overlooked Finn’s breathing mask, until a reader pointed it out that he wears one! However, it’s still not a good idea to expose yourself to the vacuum of space without a space suit. If anyone brings up Han and Leia walking around inside that space slug… that’s a living creature and it’s not unreasonable to assume that so deep inside it’s body there is no longer a vacuum.)
I think including a Rey Poppins scene will not go down well with some fans, while others will certainly love it. Especially Rian Johnson who is probably cackling right now, rubbing his hands, thinking of clever things to post on Twitter once some fans will voice their discontent with this scene come December 20th.

And as a bonus here is the, in my opinion, much better The Rise of Skywalker poster from Germany: 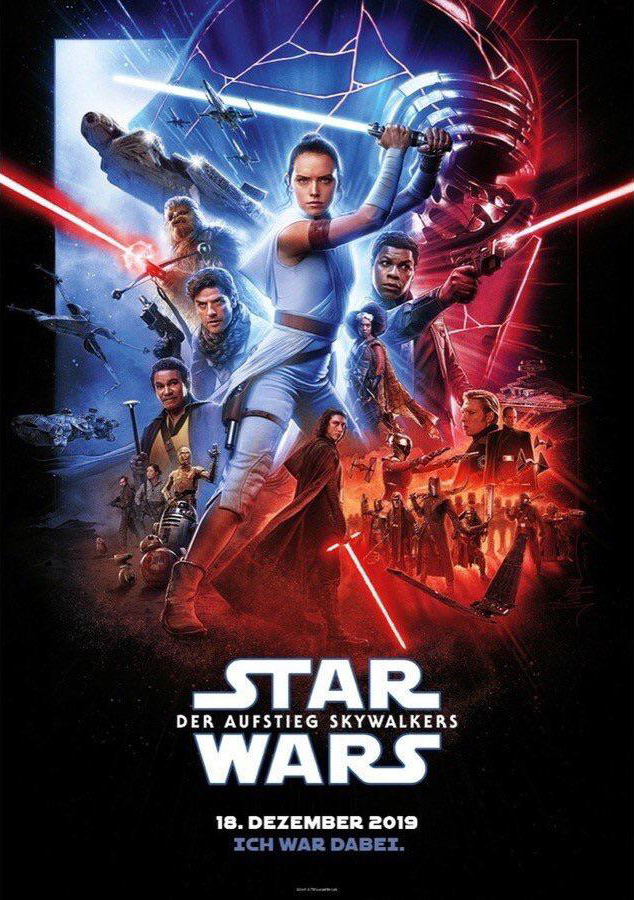 Also, it’s somewhat difficult to see, but this poster includes a Porg. It seems Chewie has not eaten them all… Shame! I mean, good for the Porg! I guess we’ll get at least one Porg on the Falcon. Hux is on the poster as well. Good for him! Zorii Bliss is on the side of the baddies here, but that’s probably just an artistic choice for the poster, since all the leaks say something very different. Rose fans will be happy to see she’s included as well, but very tiny, probably proportionate to her role in the movie. Only Dominic Monaghans’s character is tinier. Not counting the Porg, of course. The only characters missing from the Rise of “Skywalker” movie poster are any actual Skywalkers. Unless Rey is Luke’s long lost twin sister after all! Don’t ask! The Force works in mysterious ways!

So, how do you like the spots? How do you feel about Rey flying through space and Finn breathing in a vacuum? Do you like how the Knights of Ren gather on a mountain top? Is the treadspeeder catapult maneuver a cool thing and something you should really do in battle? How does the treadspeeder driver prevent a concussion when the vehicle slams down on the ground again? Does the First Order have free health care or does the driver have to buy headache pills from his own money, do First Order Stormtroopers even get paid? Will the Sith Troopers shoot even one Space Horse or will the Space Horses kill them all with rainbow beams and butterflies? How many Resistance ships will explode until Rey destroys the entire Sith fleet with her mind?

And yes, please don’t take anything I said here too seriously. It’s Saturday, so let’s have fun! 😀 It’s just that since the Mandalorian aired I hardly care about The Rise of Skywalker anymore. Which is odd, because I bet Lucasfilm hoped for the opposite effect. But I can’t help it. I am much more looking forward to next week’s Mandalorian episode than The Rise of Skywalker. I wish it was different. I really do! I find it sad that my excitement has not increased. Actually, I am dreading the movie, because I fear the leaks may all be true… I really hope they are not true and that I will be pleasantly surprised! But as Luke said… you have to confront your fears! So I will be there, December 18th (Germany gets to see the movie early).

On YouTube people are having fun with Luke’s phrase from the second tv spot, mocking it all the way. I hope you’ll have fun as well in the comments! But as usual, keep it cool!

Next Article: Free Shipping Through The Holidays At The JTA Store