Many fans wondered why there is no merchandise for one of the breakout characters from the Mandalorian. Of course I am talking about the cutest infant ever seen in Star Wars. Now Variety has an article on their website saying that Jon Favreau is actually the one to “blame” here, he specifically asked Disney to withhold merchandise for Baby Yoda so that viewers would not be spoiled. Now while most of the world still cannot watch the show legally, the cat is out of the bag. Not only do mainstream newssites (even here in Germany where the show won’t be available before April 1st 2020!) report about Baby Yoda, the official Star Wars twitter posted a photo. So the character can hardly be considered a spoiler anymore. Which is why merchandise can finally hit stores. But I digress, fans of the show and the character can be happy that merchandise will hit stores before Christmas. Some t-shirts are already available but of course everyone is waiting for that plush Baby Yoda. What other merchandise do you want? Leave your suggestions in the comments! Read the Variety article here! 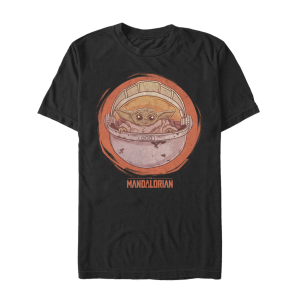 The cutest t-shirt print ever?