SH.Figuarts have revealed two all-new Star Wars figures. One of them is actually not just a figure, but a set. First there is the Mandalorian, as you have seen him for about 10 minutes in the show before he gets his first piece of new armor. He comes with a cloth cape, looks very crisp, as usual, but maybe his helmet is somewhat too small, which is a common issue with many helmeted SHF figures.

And then there is the set with Emperor Palpatine from Return of the Jedi. In the set, you will get the Emperor, two Royal Guards (that are basically just statues), and of course, you get his throne. The Emperor comes with several extra pieces and bits. Including alternate heads, hands, Force lightning, and alternate legs and robes so he can sit on his throne. While the Mandalorian is a regular release, the set with the Emperor is a web exclusive and it will cost around $180. Going by the photos released by SHF the likeness is maybe not the best. The Emperor also seems to be a bit tall in the comparison photo with Vader (and Vader’s height is pretty accurate).

Both figures are expected to be released in May 2020. Pre-orders go live on Friday, November 22nd. If you want the Emperor you get a pre-order window. Everyone who wants a figure will get one. This is how the Bandai web exclusives work, figures are made to order. However, if you miss the pre-order window you will have to pay a lot on the aftermarket once the figure is released. Check out more photos on the SHF homepage!

Will you add these two figures to your collection? 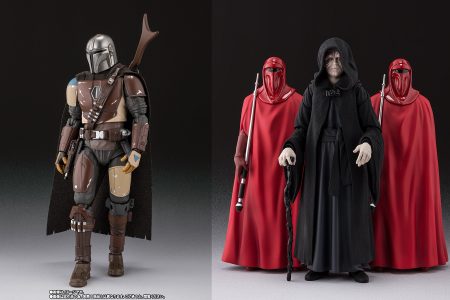 Next Article: New Character Posters Revealed For The Rise Of Skywalker