Here we go again. We have a “sneak peek” of the TARGET exclusive The Vintage Collection Special Action Figure Set (Cave Of Evil) three-pack. I wish I could say that this set makes me happy. It does not. (more….) 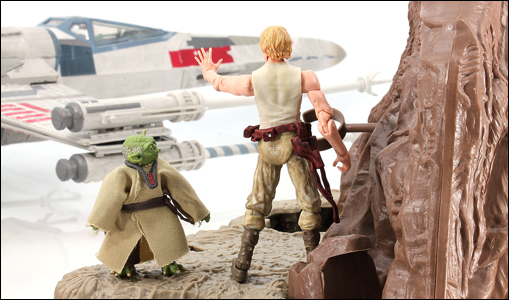 Hasbro knew how much collectors HATED The Black Series [Phase I] Luke Skywalker (#21) (with robotic arms) figure, yet they believe that a dorky new head sculpt will make all things right with those arms. (Spoiler: It doesn’t.) The new portrait on Luke Skywalker utilizes Photo Real, but something is lost in translation, as it looks nothing like the onscreen character. Would you believe that Hasbro employed Photo Real technology on the Darth Vader figure It looks slightly better, but most collectors who have been in this hobby for decades will still likely default to the gorgeous 2000 Power Of The Jedi Darth Vader (Dagobah) figure because that figure is still the best.

Obviously, Yoda is the reason to purchase this set. And now we know what the mystery behind this figure is. Instead of giving us an all-new figure, Hasbro dusted off 2011’s TVC Yoda (VC20) figure, tooled a new portrait, and then used the soft-goods and accessories from 2014’s TBS [P1] Yoda (#22) figure to complete it. Yes, you’ve guessed it. Yoda still has “swelbows,” the egregious answer to lazily articulating elbows. Hasbro couldn’t have upgraded Yoda with ball-jointed elbows for this release”? I digress. Ultimately, the Yoda here is the best modern definitive update to 1980’s ESB Yoda figure, so I guess we should count our blessings.

Overpriced, recycled, and screen-inaccurate (Luke had his complete “Bespin Fatigues” outfit in this scene), the Cave of Evil pack is further marred by the lack of The Empire Strikes Back logo on it. (But you better get used to that.) I’d like to know if Hasbro will ever finish off the remaining original Kenner Special Action FIgures sets because that’s what I want to see the most. Anyhow, please check out the sizeable 92-image gallery RIGHT NOW in our Research Droids Reviews. The review will launch shortly.

Please leave your comments on the review page in our RDRs. Thank you for reading!