The End Of The Skywalker Saga

Here we are. Four years after everyone was excited about The Force Awakens the (according to Disney) final movie in the Skywalker Saga will be released in less than two months from now. The culmination of a movie series that first changed the world of cinema forever and inspired an entire generation of kids and adults in 1977, when Star Wars introduced us to the Force, Luke Skywalker, Han Solo, Princess Leia and Darth Vader.
And while it was never advertised as such at first, Disney is now emphasing over and over again that the “Skywalker Saga” will be concluded with Episode IX. So maybe now is the perfect time to reflect, to look back, to talk about how we feel about the fact that with Rise of Skywalker everything will end, as far as movies with Skywalkers and original trilogy characters in them are concerned. Much has been written about the sequels, several actors have spoken about how they feel, Anthony Daniels only talked about his feelings last weekend. So let’s talk about how we feel. Click through for more! 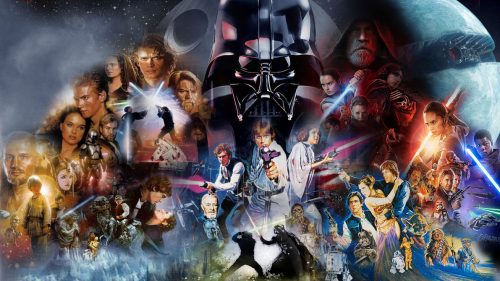 I would suppose that quite a few Star Wars fans feel very different in 2019 than how they felt in 2015 when Force Awakens was close to release. Expectations were either subverted or maybe met and even exceeded, depending upon your tastes and general mindset. But let’s not dwell on any one movie here. Let’s take a step back and remind ourselves that The Rise of Skywalker is actually the end. At least as far as Original and Prequel Trilogy characters are concerned. That was it. We will see Luke Skywalker for one last time, we will see Leia for one last time, and I bet a lot of money that we’ll also see Han Solo for one last time. Not forgetting Chewbacca, C-3PO, R2-D2 of course. They always were an integral part of the saga.

So here we are. Are you in any way wistful or nostalgic? Do you even care? Fans who saw the Original Trilogy when it was initially released certainly know the feeling, no one really thought we would get more Star Wars movies back in the early 1980s. 16 years later The Phantom Menace subverted many expectations. Fans who grew up with the prequels also know the feeling, when in 2005 we saw how Darth Vader was born most fans certainly thought “this is it”. But a decade later Star Wars was brought back to life in the cinema. And now? Now we certainly get an ending, for real (?). Fact is that the sequels were the last chance we had to see Mark Hamill, Carrie Fisher, Harrison Ford, Peter Mayhew and Anthony Daniels in a major Star Wars saga movie. In all the decades before there was still some vague hope that maybe one day we will see them again. Now that we have seen them again they will go forever. Sadly, Carrie and Peter are no longer with us. And on screen Luke Skywalker is dead, Han Solo is dead and Leia will certainly die in Episode IX at one point.

How does that make you feel about your own life? Some of us are 42 years older now than they were when they first saw Star Wars, we’re past the midway point.

Before it’s getting too dark… I thought long and hard when a JTA regular suggested I post an article about how we all feel about the end of the Skywalker Saga. Much was said, much was written. Mark Hamill famously quipped about portraying someone named “Jake”, and Anthony Daniels said he felt like a table decoration in the movies (he talks about Force Awakens and Last Jedi and not Rise of Skywalker with which he is rather happy) in an interview for his new autiobiography.

I could write a lot of things now. Am I wistful? Yes. Am I happy Star Wars is back? Yes. But I also think the Skywalker Saga deserved a better final act and it makes me sad that the final chance to see Mark, Harrison and Carrie on screen, together, was squandered. Such a missed opportunity. The passing of Carrie makes me sad, because it means it’s really, truly, actually the end now. There will never be another movie with them together. It also makes me think about how I have grown older.

But before I write too much, it is already too much, as usual, I think I can encapsulate all my feelings with music, or rather, how the music is performed. So I encourage you to check out the three music videos embedded below.

And yes, I want to end this article on a somewhat more lighthearted note, so please don’t take it all too seriously. It’s just how I feel, and that doesn’t mean it’s fact, not at all, what you feel is what you feel, there is no right, no wrong. But if anyone asked me right now, right here, how I feel about the Skywalker saga? I would play him the three videos. You don’t need to watch them in full, 30 – 60 seconds each will suffice to get the idea. If you are into this kind of music I certainly encourage you to watch the first video all the way through to the end. Because it’s simply amazing.

The Skywalker Saga in three acts and how it makes me feel:

So how do you feel about it all? Don’t make this about just one movie, or if you want to, then go ahead, but I’d rather we’d talk about the big picture here. How does it make you feel that the Star Wars saga, the Skywalker Saga, is nearing it’s definitive ending, for real this time?

Thanks to JTA reader Mic Windu for providing the idea for this article!

The artist in the first video is Valentina Lisitsa, check out her other videos on YouTube if you like this kind of music.