Do You Have Some Extra Cash? Buy A Rocket-Firing Boba Fett!

An ultra rare Kenner Rocket-Firing Boba Fett action figure is up for auction! Hake’s auctions has the figure and they believe it may bring in up to $500,000. Now, I think this is a bit on the high side. Earlier this year an unpainted prototype of Rocket-Firing Boba Fett was sold for a then record high of $112,926. What speaks for the Boba Fett up for auction now is its near mint condition, he’s also fully painted. The figure is AFA-graded 85+ NM+. You can see a photo of the actual figure below, click on it to see it in great detail. The current bid is almost $121,000, with 14 more days to go, so this Boba Fett will definitely set a new record for the most valuable Star Wars action figure ever, even if it’s not auctioned off for $500,000.

Go to Hake’s auctions to see all the details, including more photos, plus certificates of authenticity. They also have a carded double telescoping Darth Vader and Obi-Wan Kenobi (both believed to bring in up to $100k) up for auction. Certainly the perfect gift for any serious Star Wars fan! Now you only need to find someone who has the money and who likes you very, very much! Thanks to Aldo S. for the alert! 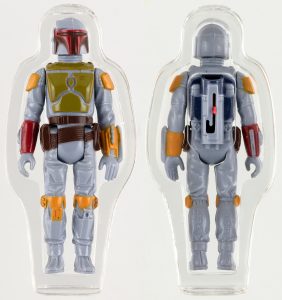 Next Article: Check Out The Cover For The Upcoming "The Rise of Kylo Ren" Comics!