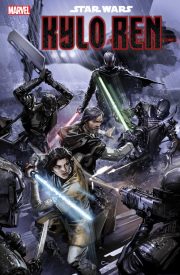 Check out this revealing solicit for the series! It definitely answers a few more questions many have had since we learned of the Knights of Ren and Luke’s Jedi Temple, but it also raises more…

“With the new jedi school in ruins and fellow students hot on his trail for the murder of their master, Ben Solo flees to the only friend he has left in the galaxy…a man named Snoke. But Snoke has plans for Ben…and ideas about the Force that are as dangerous as they are intriguing for the troubled young jedi. If Ben wishes to be truly free…the answers might lie with the dark side. And with the Knights of Ren! But it won’t be the first time he’s tangled with the Knights. In the past, Jedi Master Luke Skywalker journeys to the Unknown Regions and brings young Ben along for the mission. Can even Luke Skywalker stand against the fabled Knights of Ren?!”

Wow! Some of Luke’s students not only survived, but some of them didn’t join Ben and instead were hunting him. This opens up MORE questions such as how many students in total survived? How many hunted Ben and how many joined Ben? Did ANY of them join Ben, or did Luke just think they joined him since he was knocked unconscious and they were gone? These students believed Ben murdered their Master, so it’s reasonable to think Luke thought they joined Ben when their bodies weren’t found with the rest. What do you make of all of this news coming from this potentially great comic series and does this supplemental material excite you? I know I am excited and I believe this will fill in a lot of great info which will enhance the movie. That is what I believe all good supplemental material does if it involves characters from the screen.

Previous Article: Do You Have Some Extra Cash? Buy A Rocket-Firing Boba Fett!