Hasbro released their numbers for the 3rd quarter 2019 earlier today. And while overall net revenue is almost flat, compared to Q3/2018, Hasbro’s Partner Brands saw significant growth again after several weak quarters. Click through for all the relevant details!

These are the overall numbers for Q3/2019

This is how Hasbro’s revenues and earnings in North America, the international market and Partner Brands have developed over time in the past few years, for this chart respective quarters are grouped together for easier comparison of performance:

Revenue in North America is down, international revenue is basically flat and Partner Brands are significantly up compared to Q3/2018.

And here’s a closer look at just the 3rd quarter results of the past few years: 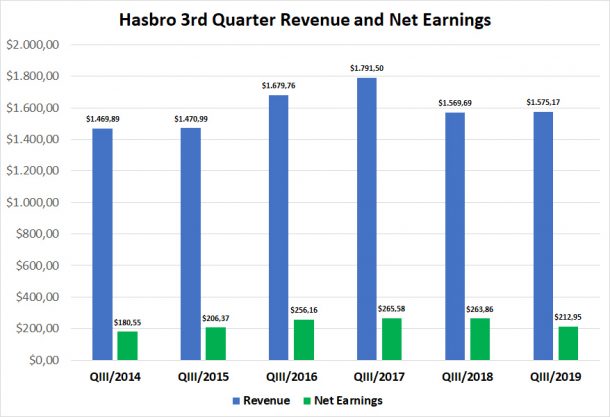 Q3/2019 growth is almost flat, but net earnings are down. Hasbro’s explanation for this is higher royalty payments, which makes sense when you see that Partner Brands are significantly up, and those have lower margins overall and significant royalty fees.

So with the overall numbers out of the way let’s talk about the one thing that is of most interest to us, Partner Brands. As usual Hasbro does not give any numbers for individual brands, only vague general statemends are made by Hasbro. So how do things look? Well, they look a lot better than previously, Partner Brands revenue is up by almost 40% compared to Q3/2018, which also illustrates how weak sales were one year ago with no Force Friday and weak overall Star Wars sales. 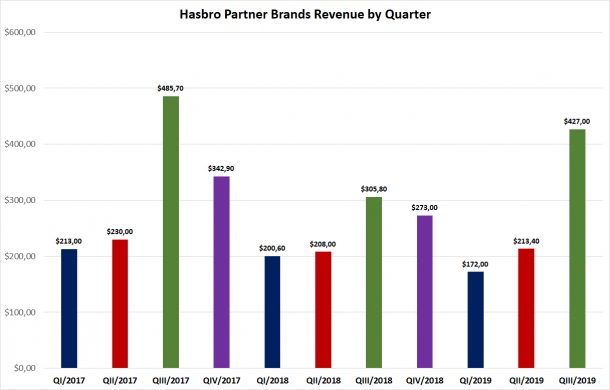 I color coded each quarter so you can easily compare them. No numbers prior to 2016/17 exist, because Hasbro restructured things only a few years ago when “boys toys” were phased out and instead “Partner Brands” was introduced as a new segment.

We can see that while numbers are a lot better than last year they are still down compared to 2017 when Last Jedi was marketed. However, this year Force Friday was one month later and fell outside the 3rd quarter, so the Q3 results only include pre-orders by retailers etc. But according to Hasbro Star Wars is off to a strong start with Force Friday.

Hasbro says Partner Brands growth is due to Marvel, Frozen 2 and Star Wars, no details are provided, as usual.

Star Wars was mentioned in the earnings call this morning a few times, these are the relevant quotes by Hasbro:

STAR WARS Triple Force Friday featured meaningful pre-order activations tied to product reveals and launch initiatives planned by online retailers. We also created limited editions of some of our most popular fan items to drive foot traffic to retail on opening weekend.
Key retailers featured out of aisle placement of product and plan to continue to ramp support of the line as we move closer to the holidays.

So Hasbro created the brick and mortar exlusive First Editions to support their retail partners by giving them exclusive packaging. The big question is what “meaningful pre-order activations” actually means.

In order to ensure we had inventory available domestically to meet on shelf dates for Frozen 2 and STAR WARS, we also prioritized our Partner Brands through our supply chain. In addition to products associated with those two brands, MARVEL properties also continue to perform well. As retailers focus on reducing inventory levels, retail inventory is down.

So retail inventory is still down overall? This certainly is a general statement about all of Hasbro’s toys, not Star Wars.

Royalty expense increased in dollars and as a percentage of revenue on higher Partner Brand revenues. Based on our expectations for the full-year, we now anticipate royalties to be approximately 8.5% of revenues. Dependent on the level of shipments associated with Frozen 2 and STAR WARS which occur during the remainder of this year, royalty expense could exceed this amount.

It’s only to be expected that with increasing Partner Brands sales royalty expenses go up as well. Star Wars is not a cheap license.

The — as we look to 2020 while we usually give guidance about the upcoming year at Toy Fair and we will do so again, really the strength of our partner brands that we’re seeing right now at Retail, with Frozen 2 and STAR WARS just coming out and launching initially with mostly the fan base in STAR WARS coming out on October 4, for Triple Force Friday, very exciting. We see that as we’ve previously spoken about really continuing into 2020.

Hasbro seems to be rather optimistic about the future of Star Wars in 2020 and thinks the momentum built up now will still be strong in 2020.

Brian Goldner himself also says that Hasbro think 2020 will be quite strong:

It’s certainly great to hear that Hasbro is seeing strong demand for Star Wars! The brand needs this more than ever now after several quarters of steep decline.

And here are some general remarks about Hasbro’s 3rd quarter by Hasbro:

All in all it seems Hasbro is on track to a profitable full year. It will be interesting to see if Partner Brands revenue in 2019 can beat 2017. In 2017 Hasbro made $1.27 billion with their Partner Brands. For the first three quarters of 2019 Partner Brands revenue is $812.4 million. So Hasbro needs another $459 million in Q4. This seems somewhat unlikely, because traditionally, Q3 is Hasbro’s strongest quarter for their Partner Brands. So even though things will significantly improve again, chances are overall revenue will be somewhat lower than 2017, but with a much stronger Marvel brand. We can only guess what that means for Star Wars. Chances are that Star Wars revenue in 2019 will be much better than in 2018, that is virtually guaranteed, but still somewhat worse than in 2017.

Also, it’s interesting to hear what issues Hasbro has with shipping and distribution. We can certainly be happy they prioritized Star Wars, which shows how important the brand still is to them.

But despite all the distribution issues, it’s finally good news again that Star Wars sales have apparently recovered (without having any real numbers, just going by the statements issued by Hasbro), which was expected of course, with no Force Friday in September last year sales had to be much better in Q3/2019.

Nothing was said about a Star Wars license renewal. The license will expire late 2020. So we should hear something rather sooner than later.

Previous Article: Let's Have A Spoiler Filled Discussion About The Rise Of Skywalker Trailer!