The Vintage Collection 2.0 - A Comprehensive Overview

The Vintage Collection was brought back to life by Hasbro in April 2018. Time to look at some numbers. How many figures are there? How many are actually all new? And what source material was used for the figures? Click through for a comprehensive TVC 2.0 overview with bar and pie charts!

Update: another chart added with better visualization for what figures have new parts. 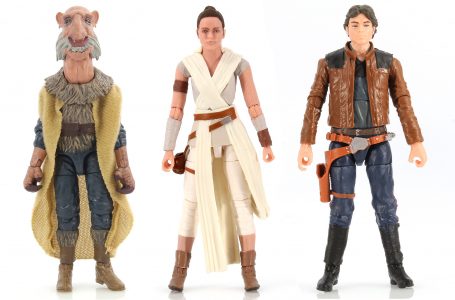 Let’s start with the basics! I considered all TVC 2.0 figures that will be released until the end of 2019, so basically all the recently announced figures, anything that is available for pre-order, is included.

The total number of unique sets, including, figures, vehicles, playsets and exclusives of any kind: 63.

But for the sake of this overview I do look at individual figures, so each figure from a multipack or any figure that comes with a vehicle is considered, that includes figures like Jabba from the Barge, for example.

The total number of ALL figures, including repacks from exclusive sets like Doctor Aphra, all vehicles and playsets: 75. 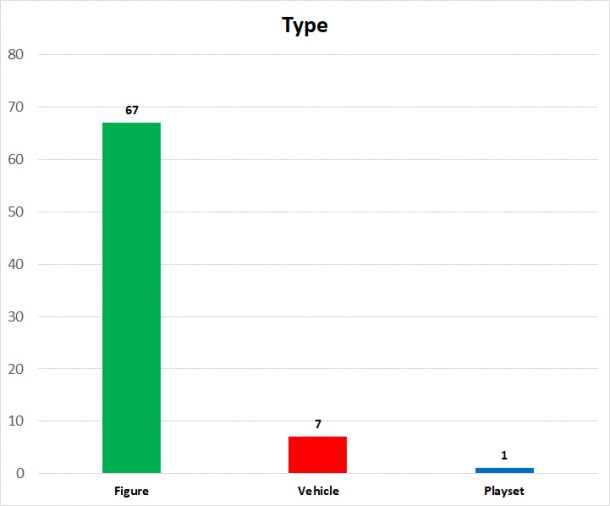 Of those 67 figures four are straight repacks from previous TVC 2.0 releases, either from exclusive sets or they are just figures with different accessories (Sith Trooper Armory Pack).

With that out of the way let’s look at some more detailed stats!

What era are the figures,vehicles and playsets from? 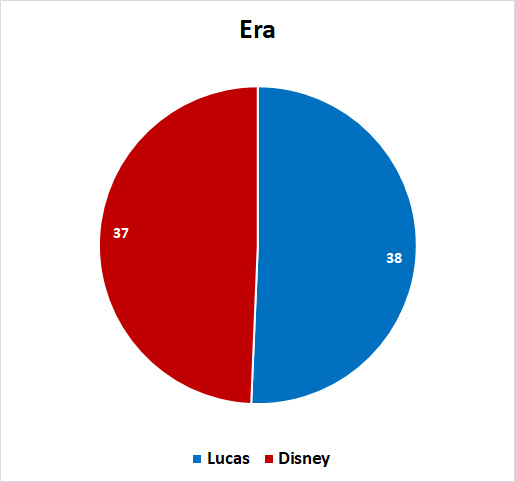 I determined the era by what cardback was used. So even though the Death Star Gunner was first seen in A New Hope and can absolutely be used for any Lucas era displays, the figure was released on a Rogue One cardback, and hence it belongs in the Disney era. Likewise, the Imperial Stormtrooper came on a Rogue One cardback as well and thus counts towards the Disney era, keep that in mind!

As you can see it’s almost evenly split between the Lucas and Disney era. If you consider figures like the Death Star Gunner or Imperial Stormtrooper the Lucas Era has slightly more overall releases than the Disney era, but for all intents and purposes it’s about 50/50.

What sources were used for the releases? 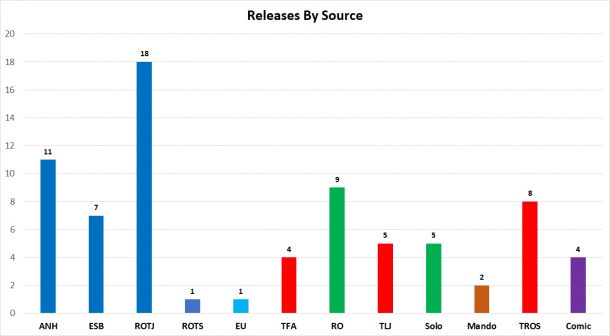 This counts each and every release, including straight repacks like Aphra who saw a single release some time after her SDCC exclusive multipack and figures that come with vehicles.

If we look at individual movies/series we see that Return of the Jedi clearly dominates the number of releases. The first half of 2019 saw quite a few releases or Return of the Jedi. It may surprise some people that The Force Awakens only has four figures in TVC 2.0. The Last Jedi only has five and The Rise of Skywalker is the sequel movie with the most overall releases in TVC 2.0. If we just look at individual movies then the OT is dominating, more or less.

But you can also see that one era is almost completely absent from TVC 2.0 – there are almost no prequel figures, the 41st Elite Clone Trooper is the lone figure from the prequel era. Also absent from this list are the Disney animated shows, there are no Rebels and Resistance figures in TVC 2.0 at all.

Rogue One, with it’s OT inspired design, is the Disney era movie with the most TVC 2.0 releases, chances are that The Rise of Skywalker may eventually surpass Rogue One, it depends on what’s coming in 2020. But even so neither of the Disney movies or shows has a deep character selection in TVC. The Black Series sees more releases overall here, but even here most of the figures are main characters and troopers. Hasbro certainly has lots of gaps to fill in the time between Rise of Skywalker and late 2022.

All new sculpts by source and era

One very much debated topic is the number of actual all new sculpts. How many are there? What source was used for the new sculpt? Let’s look at the following bar graph: 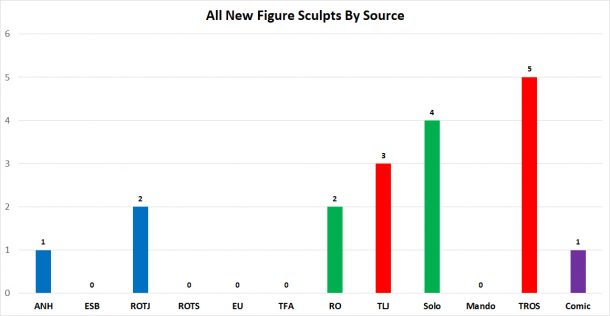 As you can see when it comes to actual all new sculpts then the Disney era gets the majority of figures. There has been one all new figure from A New Hope and two from Return of the Jedi, the Death Star Gunner and Imperial Stormtrooper count towards Rogue One, since they come on a Rogue One Cardback, but they could be considered the second and third all new sculpt from A New Hope, if you want to.

But it should be no real surprise that the Disney era gets most of the all new sculpts, new entertainment is the focus, and Disney certainly tells Hasbro to focus on that.

Here is a pie chart to further illustrate the point: 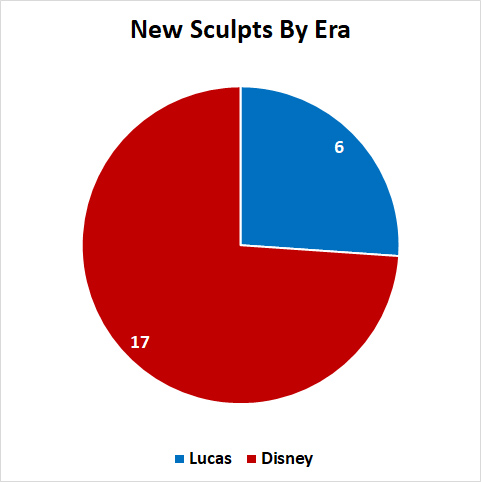 This pie chart also considers the vehicles and the playset. Almost 3/4 of all new sculpts are from the Disney era.

Which brings us to the sculpts and under which category they fall: 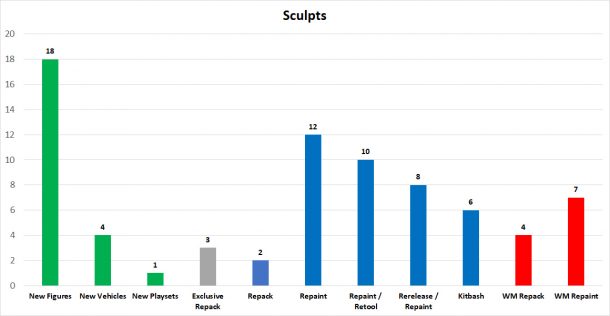 As you can see there are 11 Walmart repacks in total in TVC 2.0. A kitbashed or retooled figure can have some new parts, most of the time a new head, maybe a torso, but it’s not “all new”, since most of the figure is based on a previous release.

When we talk about repaints, there are 22 photoreal figures in TVC.

To get a better idea of how things actually stack up here is a different visualization for the data, a stacked bar chart, for this I did not consider the repacks from the SDCC exclusives: 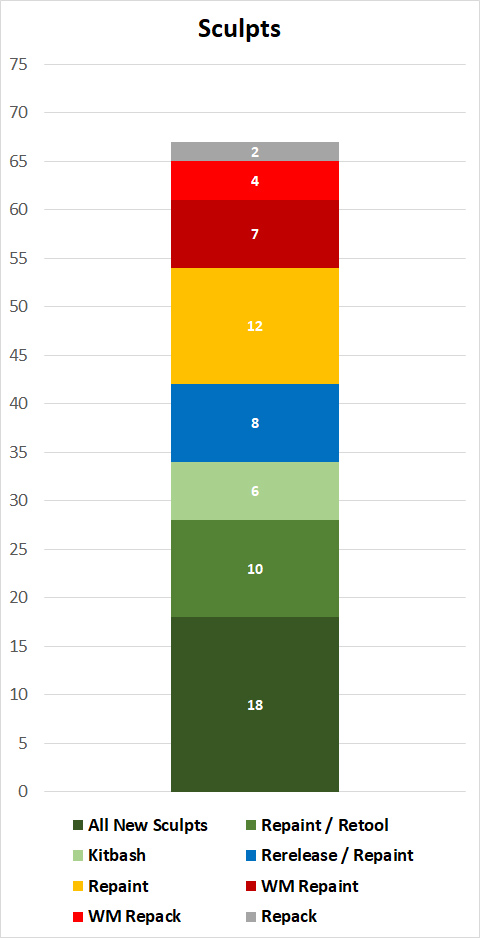 All sculpts that have at least some new parts are color coded different shades of green. In total 34 of the 67 figures could in one way or another be considered “new”. That is almost 51% of all the 67 figures (not counting the three repacked exclusives). Walmart repacks/repaints account for 11 of the 67 figures, or 16.5%, in other words 83.5% of the figures are not previous Walmart releases.

What kinds of characters are in TVC 2.0? 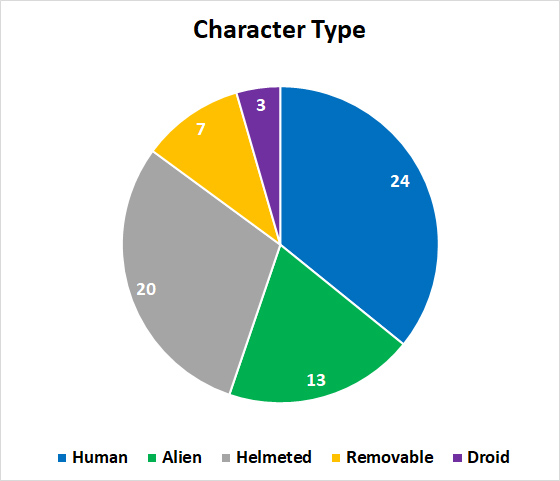 How many exclusives are there?

For this I also looked at all released figures, vehicles and playsets. 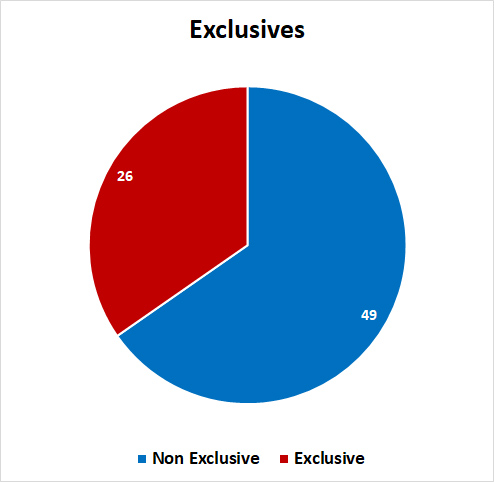 About 1/3 of all the figures, vehicles and playsets are exclusives. If we just look at the number of actual sets that were released, and not individual figures etc., then this number goes down to 17.5% exclusive sets.

Not all Walmart exclusives actually showed up at Walmart, however, but they are clearly Hasbro’s favorite retail partner, apparently. For some reason or another.

And that concludes my TVC 2.0 overview. I hope you find it somewhat illuminating or helpful. In conclusion we can say that in terms of overall releases, both the Lucas era and Disney era are equally represented in TVC 2.0, but the Disney era gets the vast majority of new figures, thus most Lucas era releases are repaints or kitbashes. The overall percentages of Lucas vs Disney era for TVC 2.0 are comparable to The Black Series, so both lines are more or less evenly split between the two.
In this regard TVC 2.0 is nothing out of the ordinary. But it also probably illustrates that the wish of some collectors to make TVC 2.0 Lucas era only will never be fulfilled. It will always feature the Disney era as well, and if the numbers are any indication, then we can say that it’ll be 50/50 for now, but I think with the growing number of Disney era releases, especially the various Disney+ shows, the percentage of Lucas era releases will eventually go down. With five Disney era movies and three confirmed Disney era live action shows, plus more movies in the pipeline, the number of Disney era releases will eventually be much larger than what the Lucas era gave us.

And when we look at the number of actual all new sculpts, then Hasbro reduced them by about 20%, when compared to TVC 1.0. It’s 30% vs almost 39%. Certainly a cost cutting measure.