Star Wars Resistance season 2 premiered in the US yesterday. In an attempt to boost awareness and maybe ratings for the series, the season 2 opening episode “Into The Unknown” is available on the Star Wars Kids YouTube channel, it’s not even geoblocked, so anyone should be able to access it.
So how was it? Click through for a discussion! 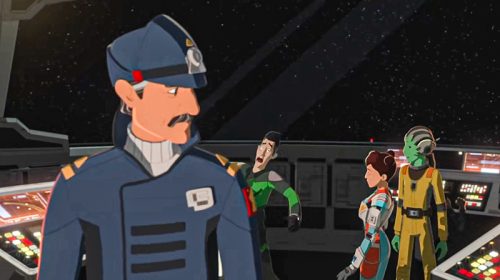 Kaz, about to fall down some stairs

The season 2 opener begins where season 1 ended, the Colossus has just made the jump into hyperspace, to escape from the clutches of the First Order. Now, the Colossus is adrift in space, various systems are malfunctioning and – please sit down – it has run out of fuel and can’t go into hyperspace anymore. It seems somewhat ironic that a refueling station has run out of fuel, maybe that’s the intention. I cannot help but think that “running out of fuel” is a plot point that should better not be revisited ever again in Star Wars. Especially after The Last Jedi.

The episode revolves around Kaz and friends trying to repair essential systems, among them long range communication and artificial gravity. However, there is a stowaway on the Colossus, a First Order BB unit is still aboard and is trying to contact the First Order to let them know where the Colossus is. Of course Kaz and friends run into that BB unit while making repairs and the episode tries to make the FO BB unit into something scary. Maybe that will work for kids, to me BB units are just “cute” and certainly not “scary”.

In the end the BB unit is jettisoned into space before it can send a message to the First Order and artificial gravity is restored.

In the very short B plot we follow Tam who is now with the First Order on a Star Destroyer. And either the destruction of the Hosnian system and death of billions of civilians is not talked about on the ship at all and Tam still hasn’t heard about it, or Tam simply doesn’t care, because she absolutely does not show any signs of distress. Actually, when asked what she thinks of the First Order she replies “It wants to make the galaxy a safe place again”… Oh well…
In my opinion Tam’s arc is still completely nonsensical. She turns her back on all of her friends and joins the First Order because she feels hurt Kaz never told her he’s a secret spy on a secret spy mission. Okay. And the fact that the First Order just destroyed several planets and killed countless innocent people is completely glossed over.

So how was the season 2 opener?

Well, inessential. Season 2 will have 19 episodes and in my opinion restoring artificial gravity is something that shouldn’t take up more than 5 minutes of screentime, but the high episode count makes this the central plot point of an entire episode. The shenanigans with the First Order BB unit were ok, but BB units are not really scary. To dedicate an entire episode to restoring gravity and a fight against a BB unit is not the best idea, in my opinion. There was almost zero plot in this episode.

Kaz is still the same old Kaz… clumsy as ever. He falls down stairs. He bumps his head against a bulkhead because he doesn’t realize that artificial gravity has failed again and he just keeps walking and talking, without ever noticing he’s floating in the air now. Later he’s too stupid to realize he’s trying to open a hatch near its hinges, Torra merely rolls her eyes and it takes her to open the hatch, by pulling on it further away from the hinges.

Now, Resistance is for younger viewers, so that may be ok for them. I can’t say, I have seen too much tv and too many movies in my life to think any of the things in Resistance are even remotely fresh or really funny, Kaz’s clumsiness is more annoying than endearing to me. All that being said, even though the episode was more or less filler (nothing really happens at all), it was still entertaining. But you will miss absolutely nothing if you don’t watch the episode. All you need to know is that the Colossus is in space and has run out of hyperspace fuel. But if you do watch the episode you can have some mild fun, if you like bumbling heroes who fall down stairs, that is.

According to the producers Resistance was always meant to be a two season show. It will end shortly before The Rise of Skywalker and the producers didn’t want Resistance to limit the movie in any way.
I feel that Resistance will always be considered the weakest of the three modern era animated shows. And it will pale completely when compared to what’s coming on Disney+ and comparisons to the new season of The Clone Wars will not help Resistance at all.

Now, the season 2 trailer promised epic things. Maybe later episodes will deliver. But to open season 2 with an episode in which nothing really happens was probably not the best idea. Perhaps it would have been better to trim down the number of episodes and to make every episode count. Resistance season 1 suffered from too many filler episodes, especially in its first half, that didn’t advance the plot at all. To start season 2 with a filler is not encouraging. So the new season is not really off to a promising start.

In case you have seen the episode, how did you like it? Leave your thoughts in the comments! Also, let me know if you would like to talk about future Resistance episodes as well! I may not talk about Resistance again otherwise other than about the final episode or so.