The promo photos by Hasbro that are either released officially or leaked are not always the best. People were quite taken aback by the amount of eyeliner, eyeshadow and lipstick the new Jedi Knight Luke Skywalker figure is wearing. Well, a first image of the loose figure in hand has appeared on the Black Series Instagram group and collectors can breathe a sigh of relief, the actual production figure looks a lot better! There’s still something off about the likeness, in my opinion, it seems Mark Hamill defies any attempts to sculpt a 100% proper likeness, but it’s certainly Hasbro’s best effort yet and a huge improvement over the Death Star duel version of Jedi Knight Luke. The figure will be a Walmart exclusive in the US. Thanks to Matthew Cohen for the alert! 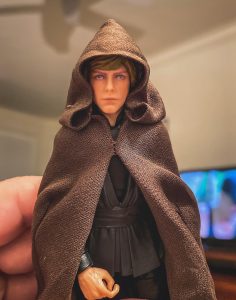 Next Article: How Was Your Triple Force Friday Experience?