A Reddit user has posted a photo of a brand new Black Series Clone Commander Fox figure, which was not officially announced anywhere. The figure is a Gamestop exclusive and is supposed to go on sale on Triple Force Friday! Some users reported pre-ordering  the figure from Gamestop several days ago. Check out the figure in the photo below! The helmet seems to be non removable? Thanks to Matthew Cohen for the alert! 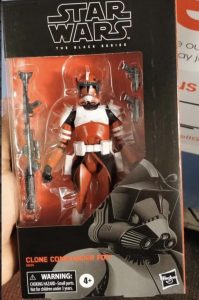