In last week’s Triple Force Friday livestream a toy photographer was introduced, his handle on Instagram is Rebel Jawa, and he had the chance to take some photos with the brand new Black Series figures. Toy photography has become ever more important in recent years. To the point that companies like Hasbro are not only aware of it, but even promote it. So I think it’s time to talk a bit about toy photography. Click through for more! 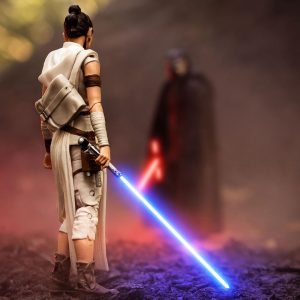 Toy photography has increased in popularity in recent years. It has never been easier to take photos of your action figures. You really don’t need all that much. And companies like Hasbro certainly love the free promotion, each and every single toy photo is, in the end, also a free ad. So it’s no surprise that Hasbro supports photographers like Rebel Jawa and provides them with free figures before launch.

And it’s not that difficult to take great pictures of your photos, there’s one very essential thing you need and no, it’s not really the camera. What you need is light. Good light makes or breaks a photo. 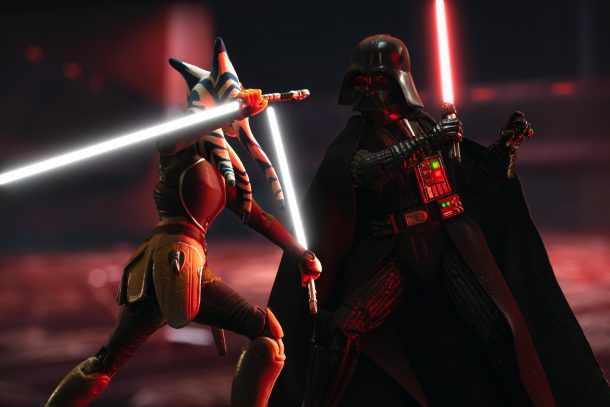 There are two ways you can approach this: you can use LED lights and use color filters and/or a makeshift softbox (diffusor), or you just go outside and use natural light. 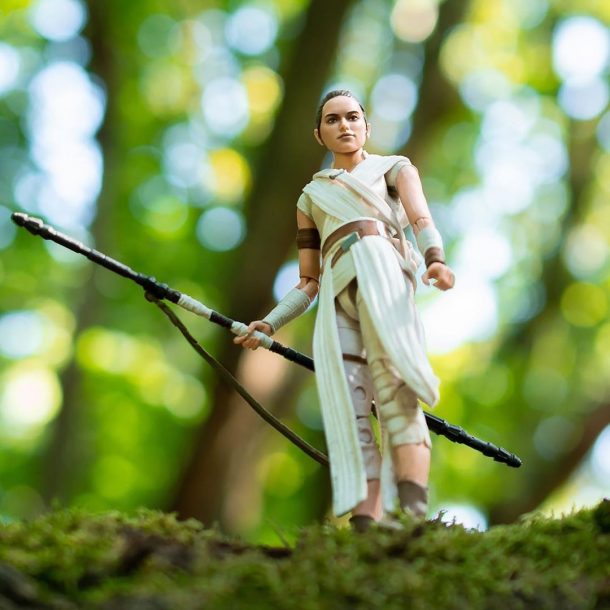 While Matthew aka Shooting The Galaxy used artificial light for his Ahsoka vs Darth Vader photo, Rebel Jawa simply used the natural light found in the forest. Maybe he also used a reflector to bounce some light and lighten the shadows. But in the right spot you can get away without a reflector, even a white sheet of paper can be used in a pinch, however.
Pose the figure on some patch of moss or so and the filtered sunlight of the forest will be your natural softbox.

So, if you have an interest in toy photography then you shouldn’t think camera first or software first, but light. Light is the single most important factor that differentiates an ok photo from a photo that really catches your attention. Kits with LED lights and a softbox can be as cheap as $30 or so. You can use multiple light sources for dramatic effect, light the background and foreground independently. LED lights can often be dimmed, which is important to control how much light there is in the scene. 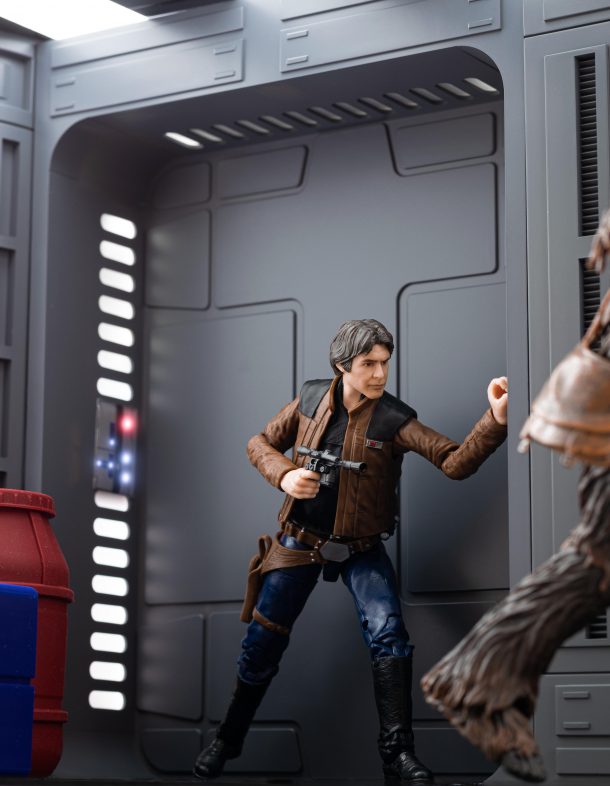 But you don’t have to spend money on dioramas if you want to dabble in toy photography. Your TV or computer monitor can double as your background, display some photo, pose your figures in front of your monitor or tv and many times it won’t be obvious that you never even used a diorama for the background. 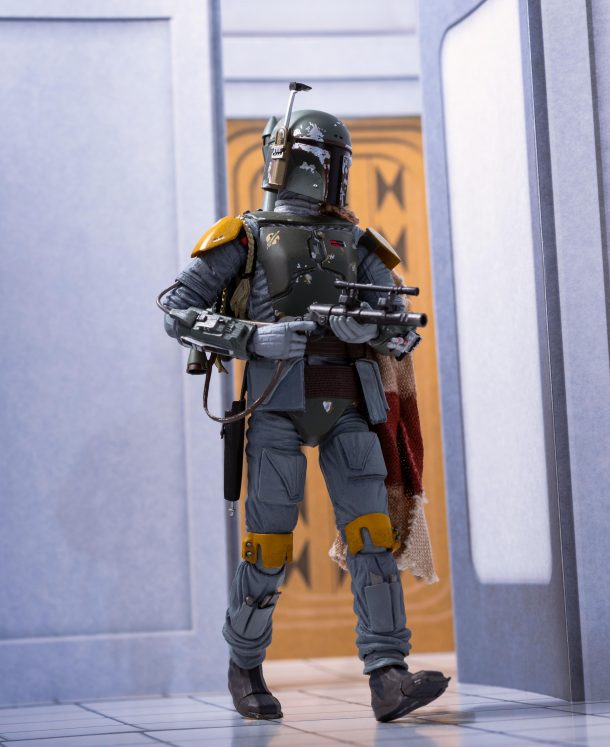 Matthew used a wire to keep Mafex Boba Fett from falling over, it would have been impossible otherwise to take a photo of Boba mid stride. You can use Photoshop to later erase figure stands or wires.

Or you go out and use nature. Rebel Jawa used the forest – and this is certainly the cheapest solution. Another favorite location are beaches. But you can virtually use any natural environment for photos. Even your backyard. 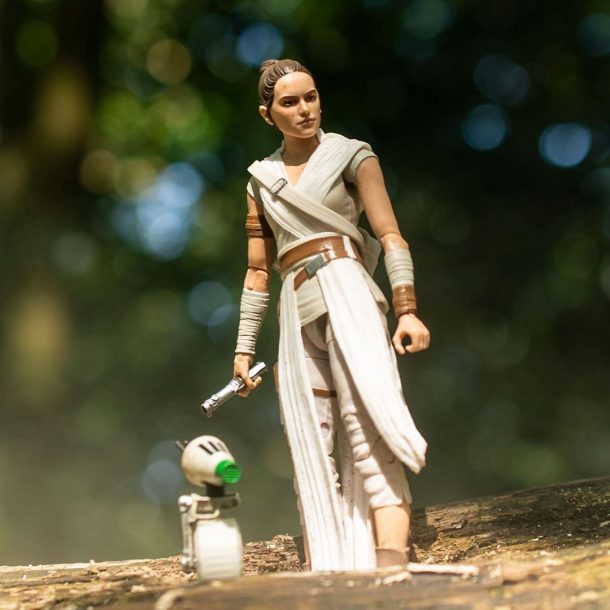 Just make sure that the light is soft, which usually means you should take photos either when the sky is overcast or early in the morning or later in the evening. During the day, and especially in summer, the sun will be very harsh which makes for unattractive photos.

And only then, when you have thought about light and then backgrounds, should you care about the camera and software.

Fact is, almost any camera will do. It should however allow you to select focus points, and a very short focusing distance would also be beneficial.

One important fact about cameras: the larger the sensor, the shallower the depth of field, which means that it may be benefial to use a camera with a small(er) sensor for more depth of field, or else only very little in your photo may be in focus. While this is great for portraits and when you want to emphasize a figure, it can be very annoying if you want to set up a larger scene where several things need to be in focus. But if want those creamy backgrounds (bokeh) then a DSLR with a medium to long lens will just be perfect.

And then there’s always the option to use focus stacking, you need a tripod, you place your camera, you take several photos while changing the focus for each photo, in the end you use software to stack the photos and to create a single photo with great depth of field. But this is an advanced technique and nothing you really need to concern yourself in the beginning.

Yu can really use any camera that will allow you to select focus. Of course, it’s better to have a longer lens. A wide angle lens is not the best solution for toy photography, macro lenses work very well, but a normal zoom lens or prime lens is also ok. You can even use your smartphone, provided it’s a somewhat higher end model with several camera modules, so you can select the optical telephoto option for a moderate zoom, it makes for photos with a more pleasing look, wide angle should usually be avoided.

And then there are effects… you can easily find “how to make a lightsaber glow” tutorial on the internet, there also also smartphone apps and plug-ins for your photo editor that can accomplish this for you.

But there are also practical effects. You can use dry ice for smoke, some people use compressed air to mimik explosions and flying debris. 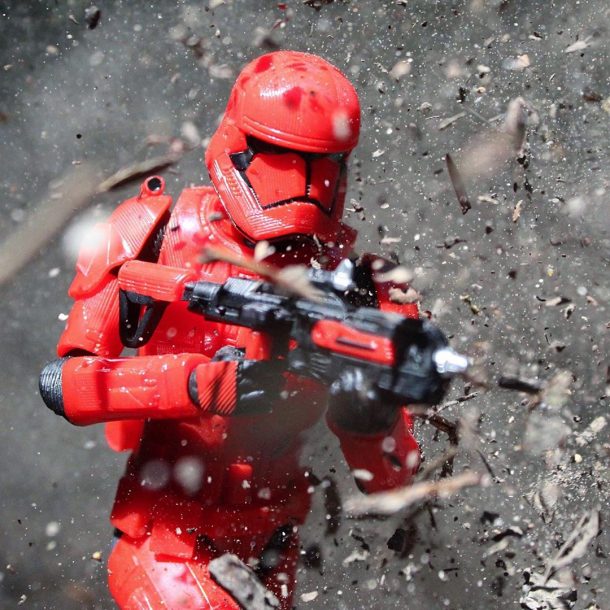 It would be close to impossible to fake that in Photoshop, so a practical effect is much easier. You need lots of light and a very fast shutter speed for an action photo like this one.

And software is really not all that important, you can use a free solution like GIMP, just make sure the software you use has something like a healing brush for easy removal of figure stands, wires or any other things you want to remove from your photo. Photoshop is the best known software, but you need a subscription for it.

Do you already take photos of your figures? If you want to get started you really don’t need much. Even your smartphone and the backyard can do. You may want to use the “Pro” mode of your phone’s camera app, however, for best results, which lets you control everything. You can use a sheet of white (or colored) paper to bounce some light on the object. But if you want to be more serious you can invest in some lights, a dedicated camera and finally also in some custom dioramas.

Check out the Star Wars The Black Series group on Instagram! It’s a large community of toy photographers, it has 109,000 subscribers and you can find great photos by people like Rebel Jawa, Sirdork730 or Shooting The Galaxy (Matthew Cohen here on JTA) there, but many, many other very talented toy photographers are featured there.