The comedy that is called “Disney Star Wars Merchandise Embargo” adds another act to the play. Facebook User Richard Nash posted photos of a yet unannounced brand new Mandalorian figure variant on the Action Figures Collectors UK Facebook group! So on top of the “graphite” Second Sister we now also get a “carbonized” Mandalorian! If you head over to the Facebook Group you will see more photos of the box, this variant still has the number “94”. Will you get these paint variants? It seems these paint variants are not meant to be screen accurate, but rather chase variants for completionists? Will you get this figure? The box certainly looks better than the standard Black Series box. Click the photo below for a larger version! 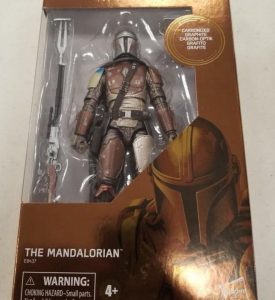 Next Article: Has The Hasbro Star Wars Brand Jumped The Shark?