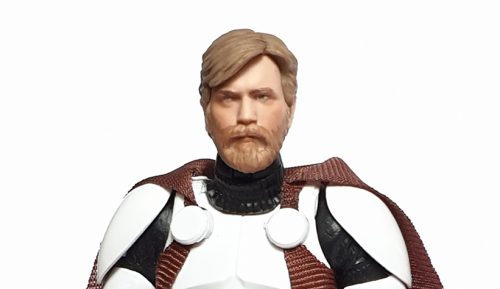 The figure is mostly a reuse of the Clone Trooper. Unfortunately, my figure has real trouble standing. This is because the soles of the boots are slightly bent. Obi-Wan likes falling over. These ratcheded ankle joints really need to go, they prevent fluid poses and properly balancing the figure. With some fiddling you can get the figure to stand, however, also, your experience may vary. I didn’t use the stand. I hate it and I think Hasbro needs to rethink their approach for the figure stand.

With Obi-Wan being mostly a re-use that also means he has a trigger finger hand for his lightsaber. That was to be expected.

But to the important part!

This is how the figure looks out of the box! 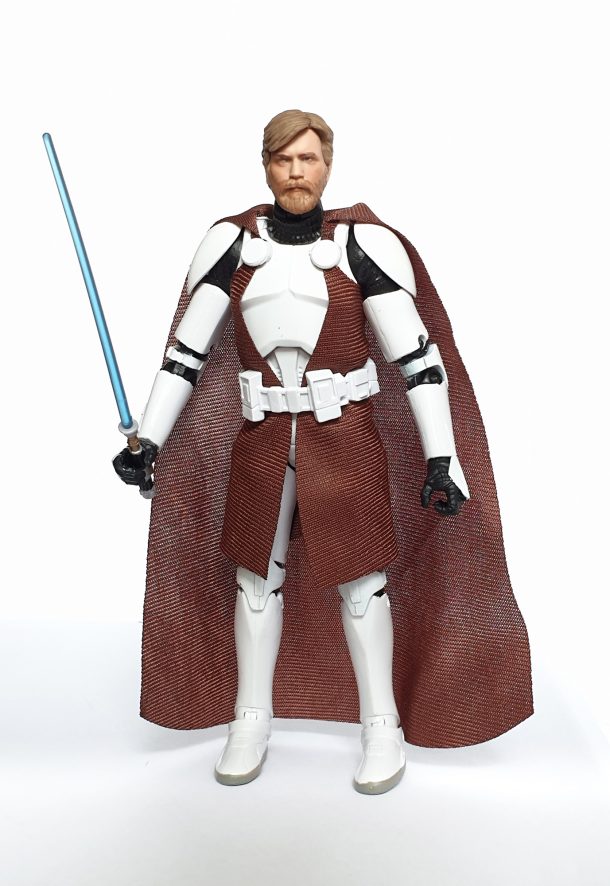 And now the important question, is the headsculpt any good (yes) and how does it compare to the previous Revenge of the Sith Obi-Wan by Hasbro and the more recent SH Figuarts version of the figure? 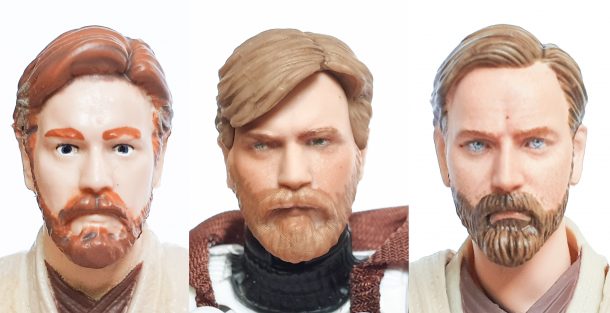 In my opinion the Hasbro headsculpt is great, fantastic even, superb. And while the hair and beard is all new I am pretty convinced that the old headsculpt was used as a base, the nose, eyes and overall shape of the face seem to be virtually identical. So I believe the new headsculpt is “just” a slightly tweaked version of the old Obi-Wan headsculpt. But you can also see what an enormous difference photoreal makes when comparing the new head to the old version, it really is THAT much better.

The SH Figuarts figure looks more cartoonish, maybe the face is somewhat too narrow as well. Obi looks a bit gaunt. But it has a few more details, like the mole on the forehead.

If you look at the large version, you will see, however, that SHF has the much better implementation of photo real. Details like the eyes are incredibly crisp (you can already see that in the small version), and the skin has a texture that gives it a natural look. In contrast to that the Black Series photo real version is a lot more fuzzy, also, Hasbro uses some kind of dot matrix tampo print for skin and beard texture for this figure. But this is only something you see in photos, maybe if you have 20/20 vision you can see it, kind of, with the naked eye, I certainly can’t. While the last few Black Series figures tended to have a sweaty sheen, this Obi-Wan doesn’t have it at all, skin looks healthy and is not shiny at all. I suppose the dot matrix skin texture helps here a lot.

Kudos to Hasbro here, their sculpt is, once more, great, and this time the sculpt is no longer let down by nightmarish paint apps.

But now the question of of all questions. Does the new Obi-Wan head fit on the old Obi-Wan body?

Since this figure uses the old Clone Trooper sculpt this means the figure doesn’t have the new neck joint, no separate neck piece either. It’s the old-fashioned ball peg. And you can remove the head easily.

So, does the head fit? 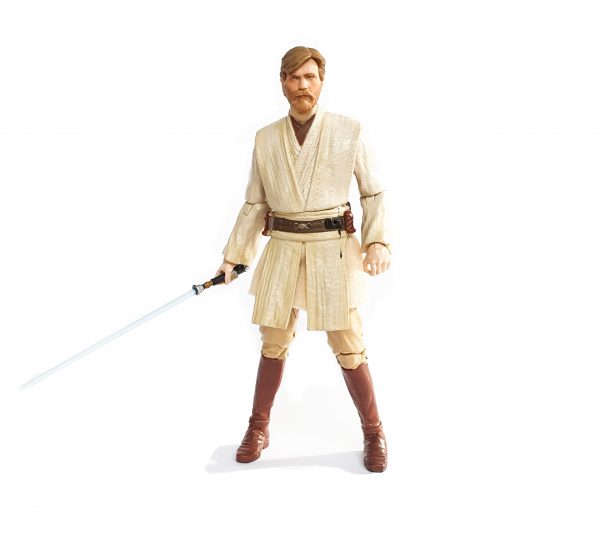 This means, that the TCW Obi head fits very loosely on the ROTS figure ball peg, whereas the old ROTS Obi doesn’t fit on the Clone Trooper body at all (not that you would ever want to do that!).

But it’s still good news that the new Obi-Wan head fits loosely on the old ROTS body. Even without further modding you can kind of position the head so it does look natural. Of course, you must not handle the figure, or else the head will fall off or change position, but once posed you could absolutely put this on your shelf and display the figure unmodded. Of course, the very pale, plasticky skin tone of the old ROTS body doesn’t match the more lifelike skin tone of the new head, so you might want to repaint the neck and hands, if you’re up for that sort of thing. But even without painting it does look alright. Lightyears better than the original version, most certainly. And with some blue tack etc you can certainly increase the ball peg size and make the head a more secure fit.

So what is my final verdict?

Obi-Wan is an ok figure overall, he is somewhat let down by the Clone Trooper body, in my opinion. But the headsculpt is superb, it can be used (with some modding, but even without modding) on the old ROTS body. But in terms of overall useful articulation and dynamic poses the Clone Trooper body is not the right choice for a Jedi, Hasbro wanted to save money, I get it, but a perfect TCW Obi-Wan figure would have received an updated trooper sculpt. Still, it’s a must buy, it’s a figure based on the old animated Clone Wars show, something all collectors will certainly greatly appreciate!