It’s leak season. While Disney insists on an embargo things leak left and right. We know of the regular First Order Jet Trooper. Not a leak for a change, the costume was on display at D23. And now the red Sith Trooper variant of the Jet Trooper has leaked. It’s safe to assume that we will get a figure of him eventually. The Sith Jet Trooper was revealed on a t-shirt, actually, but the print is pretty detailed and also provides a first glimpse at the actual jet pack itself! I appears the Sith Jet Trooper, while very similar in design to the regular Jet Trooper, shares some design elements with the regular Sith Trooper, which makes sense. It seems all Sith Trooper variants will feature the grooves on the armor.

Would you add the Sith Jet Trooper to your collection?

Click on the image below for the full version! 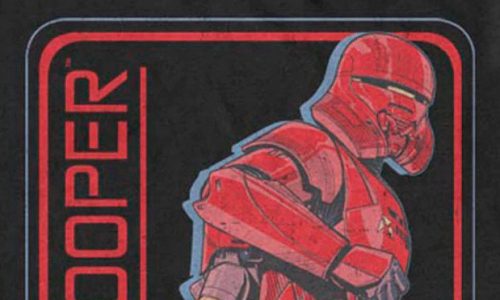