Google Trends For The Rise of Skywalker And The Mandalorian

It’s the weekend, not much to do, we have time, we can have some fun. Before the next figure leaks on ebay or Instagram we can take a look back at last week when at D23 trailers for both The Mandalorian and The Rise of Skywalker (not technically a “trailer”, but still providing new footage) were released. How has the reaction on the internet been so far? Google Trends is a useful tool to gauge online popularity of search terms, the rationale here is that the more people search for something, the more it is talked about or the more interest in something exists, both positive and negative. So how do the Mandalorian and Rise of Skywalker compare? Click through to find out! 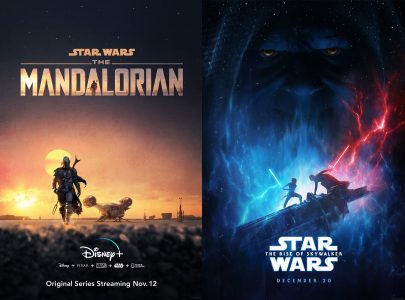 Coming to a galaxy near you very soon

First, let’s take a look at Google Trends which covers web search, i.e. what people search for on Google. One caveat: Google doesn’t “know” The Mandalorian yet, which means you can’t select it as a topic, which catches related searches as well, but when I use “Rise of Skywalker” as a search term instead of a topic a very similar picture emerges!

This is the trend for the USA only, last 30 days, worldwide looks very similar, though.

But there is a bit more data. The trends tool also lets you examine YouTube trends, another useful indicator.

Once again, USA only, last 30 days. Here you can see that on YouTube more people searched for The Rise of Skywalker, the search term was about 25% more popular.

When we look at views for the released videos on the official Star Wars channel things are more closer though.

This is a difference of 6%. What about fan feedback, i.e. thumbs up and thumbs down votes?

So both trailers received a very positive reaction. It is interesting though that The Mandalorian, despite 1 million fewer clicks, still got 10,000 more thumbs up than The Rise of Skywalker. It seems fans are ever so slightly more optimistic about The Mandalorian.

There is no proper comparison possible with The Last Jedi, there was no trailer like sizzle reel for the movie, there was a longer behind the scenes video, which was released in July 2017, also at D23. A proper comparison will be possible when the first full length trailer for The Rise of Skywalker is released. The teaser trailer for Rise of Skywalker still only has 75% of the views of the Last Jedi teaser trailer. That being said The Last Jedi D23 behind the scenes footage received much less attention. It has only 7.4 million views and merely 113,000 thumbs up and 3,300 thumbs down. But as I said, we need to wait for the trailers to compare things properly. The Rise of Skywalker footage is much more trailer like in nature than the behind the scenes footage released for The Last Jedi and dropped quite a bomb shell with Dark Side Rey. Certainly a clever move to ramp up interest.
The first full length Last Jedi trailer has 53.4 million views, released in October 2017. We will see how Rise of Skywalker will compare to that.

So what does all of that tell us?

Now, reaction to both trailers was overwhelmingly positive. Which is great. However, The Rise of Skywalker also had quite a few negative reaction videos by the usual channels on YouTube, The Mandalorian did not have that, here the reactions are much more positive throughout YouTube. But then again: Captain Marvel showed that negative reaction videos on YouTube alone don’t affect box office really. Or at all. The same channels that are highly critical of Rise of Skywalker and the sequels in general also campaigned against Captain Marvel, for months, and it seemed to have zero impact on that movie’s box office performance.

So it will be interesting to see if and how any of this will translate to the Rise of Skywalker’s box office and Disney+ subscriber numbers. Maybe the movie will be a positive surprise and come close to Endgame, at least when we look at domestic box office. Or maybe it will just do “ok”. Let’s hope for the former, but based on early trend data no one should be surprised if Rise of Skywalker “just” does ok. The biggest weakness here is foreign box office, we can already say that the movie will make virtually nothing in China and most other Asian countries. It will all depend on the legacy markets.

Next Article: The Black Series Sith Trooper Found in the US!