The Luke Skywalker (Yavin) listing that showed up on Walmart a couple of weeks ago is now visually confirmed thanks to Instagram. And it’s clearly not a straight repack as assumed by some collectors. Check it out! Thanks to JTA reader Ruari W. for the alert! Also, it’s definitely some type of retailer exclusive as evidenced by the assortment number. As Ruari and I both noticed, it looks like Hasbro is correcting their sin of placing the subtitle to the right of the figure’s name to underneath of it like it should. I am glad we whined about that now. Let’s hope they’re consistent with this fix! Original image from Tim at Bossk’s Bounty. 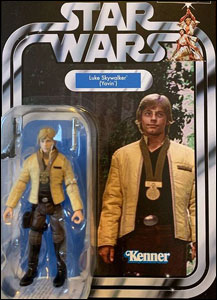