Read This Article, You Must!

The postman had a nice gift for me today. German customs has finally released my brand new S.H.Figuarts Yoda (Revenge of the Sith) figure, and after only 5 days at the local customs office the figure is finally mine!

So how is the figure? How does it compare? Is it worth buying? Click through for a closer look at SHF Yoda! 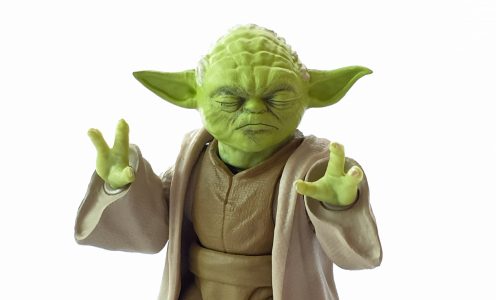 Read this review, you will!

SH Figuarts had teased Yoda for a while before he was announced a few months ago. Yoda is a web exclusive figure, which means that he’s a bit more expensive than the regular figure. You have to pre-order web exclusives, however anyone who wants a Yoda will absolutely get one. But if you missed out on pre-ordering Yoda for some reason, then expect to pay a lot more on the aftermarket.

But let’s talk about the figure!

First a look at what’s in the box. Funny enough, Yoda is the smallest SHF Star Wars figure yet, but his box is one of the largest! But that has a reason. And you immediately find out why the box is so large when you look at what’s inside. 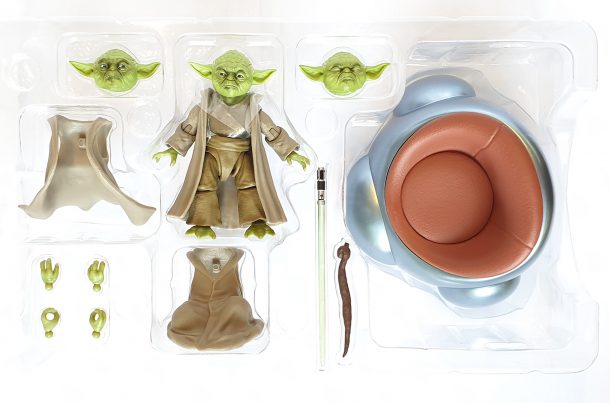 As you can see Yoda comes with quite a few things.

A few general thoughts: you either like the Figuarts aesthetics or you don’t. As with almost all Japanese action figures Yoda comes with a lot of articulation. He has knees (which bend almost all the way back), single hinge elbow, feet and hand that have ball pegs for fluid motion and a rather complicated looking hop joint. Now the floating piece that covers the hip joint may look a bit like a diaper. As I said, you either like the approach, or you don’t. SHF figures usually give a good compromise between sculpt and articulation. As you may remember, the Black Series Yoda doesn’t have knees. This Yoda can absolutely be used for action poses and he will stand rock solid on his feet.

The heads are painted nicely, it’s the typical SHF photo real approach. The rest of the figure is cast in colored plastic, but the sculpt is excellent with textures, wrinkles, creases. It has to be said that SHF figures always look a bit awkward in brightly lit photos, which exaggerate the joints, in normal light you don’t notice them as much.

The only usefull accessory missing is a ball of Force lightning that Yoda can cup in his hand. His stick hand already has a peghole, I believe SHF could have added a Force lightning effect as an accessory here which you peg into the right hand. Don’t be mistaken, you do get a lot and you can use Yoda for almost any scene you can think of, but the quite iconic pose of Yoda catching Dooku’s Force lightning is something you can’t really recreate. Yoda does have the proper hands for the pose. But you’ll have to add a ball of Force lightning in Photoshop if you want to recreate that scene for toy photos. Not a biggie, but one bright blue plastic ball that pegs into Yoda’s right hand would have been perfect.

This is Yoda with his standard robe. All three robes are made from soft and pliable plastic, so even with the standard robe you can move the legs. But if you want more dynamic poses you should use the other robe.

As you can see the elbows bend about 90 degrees. Yoda also has butterfly joints, but articulation is minimal, it’s also somewhat hindered by the robe. 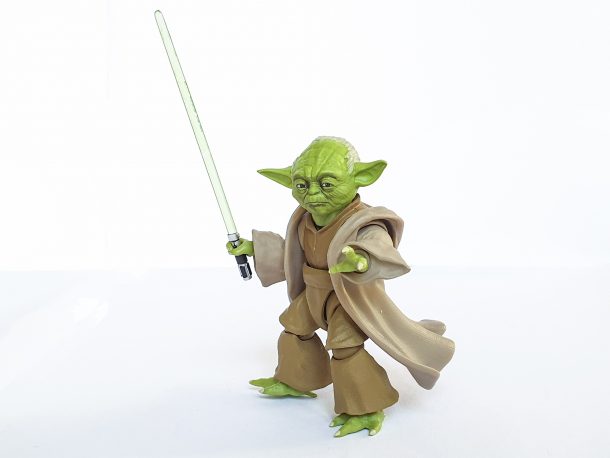 This is the alternate head with eyes looking to the left and the flowing robe for more dynamic poses. Yoda can hold his lightsaber with ease, however, you may need to fiddle a bit until the saber is secure in his hand. 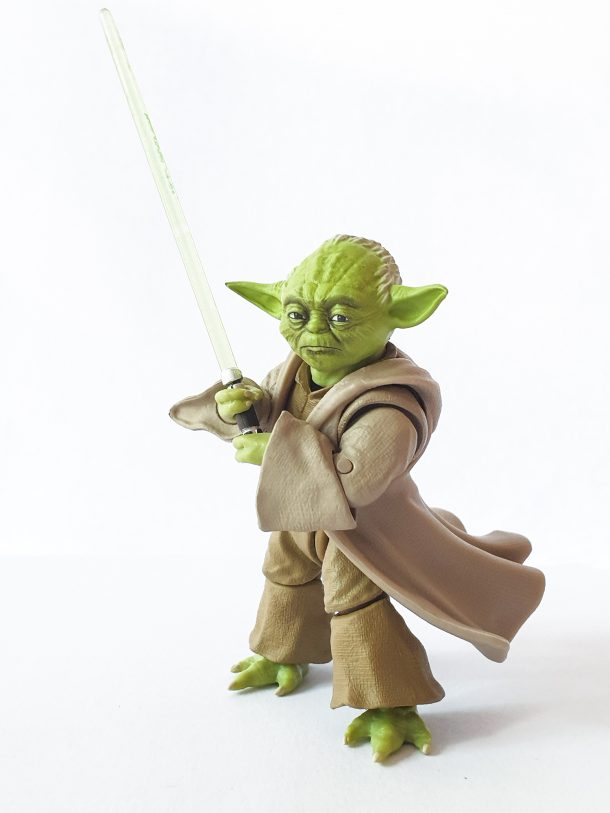 Two-handed lightsaber poses are possible, but very difficult to achieve, you have to tweak the arms a lot until Yoda can grip the saber with two hands. And even then you don’t get much range.
One thing about this figure is that the arms are meant to be easily detachable (so you can change the robe more easily) and if you twist the arms around too much you may detach them. Likewise the hands are easy to swap and because of the small size they don’t have the typical SHF joint, but ball pegs. But this also means if you try to squeeze the lightsaber into both hands you may detach one hand if you are not careful. So this figure needs to be handled with some patience. But the result is still quite nice. And the head with the eyes looking to the left are a nice touch, in my opinion. 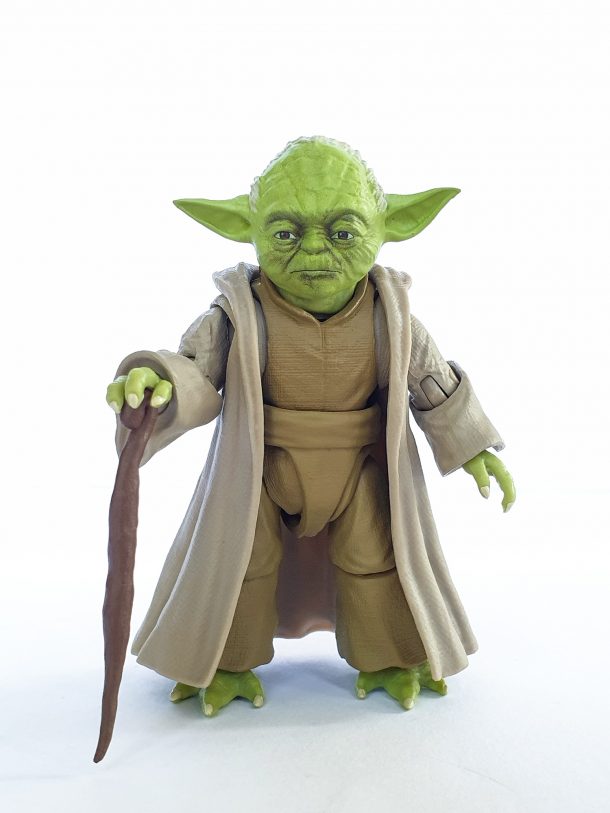 Old I am, you think?

In my opinion the facesculpt is sublime, SHF gave Yoda a very lifelike expression, you can sense his weariness, his age, but also a calm determination.

In this photo he uses his stick. Yoda comes with an extra hand just for the stick, the hand has a peghole and the stick comes with a peg, once you peg it in it’s very secure and won’t come off all that easily. The stick is beautifully sculpted as well, gnarly and all.

However, on the box you also see a photo of Yoda resting both hands on his stick. I was not able to achieve this pose. Now, I could squeeze the arms and the hands would meet in the center, but as soon as I released the pressure the hands moved apart again. So there’s either a trick to having two handed stick poses or SHF cheated a bit. Or the figure used for the promo photos is somewhat different.  One handed stick pose it is then, at least for me. Not a major letdown, but still weird. I think the robe gets in the way too much for the butterfly joint to move effectively. 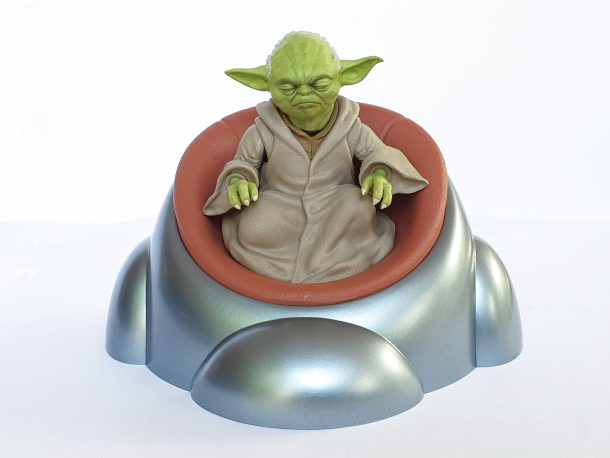 Order Chinese food, I will. Hmmmmm.

I think this headsculpt is also beautifully sculpted and captures Yoda in deep consentration, you can use it for either meditating poses or for Force power poses, when Yoda needs to focus.

The chair itself is rather large and looks really nice.

Now, how do you get Yoda in the chair? Actually, SHF came up with a clever method here. The seat is removable, and the chair itself is hollow, so what you do is you put on Yoda’s jedi council chair robe and Yoda’s legs are hidden in the hollow space beneath the seat.

All robes can be put on quite easily. You can choose to remove one arm, but you can also change robes with both arms attached to the figure. But if you want to put on the jedi council chair robe you must remove Yoda’s head. The robe then splits in two (it has two pegs on its sides and hinges open) so you can easily put it on Yoda’s body. And for a secure fit all three robes have a peg in the back which plugs into a hole in Yoda’s back. So all the robes have a secure fit, you can handle the figure and don’t need to be afraid that the robe will detach.

And here are all three headsculpts of Yoda in close-up:

Now I am certain you all want to know how SH Figuarts Yoda compares to Black Series Yoda. Unfortunately, I don’t own the Archive version with photo real face print. I own the first, somewhat crudely painted version. But the sculpt is identical of course with the Archive version.

So, how do the two Yodas compare? 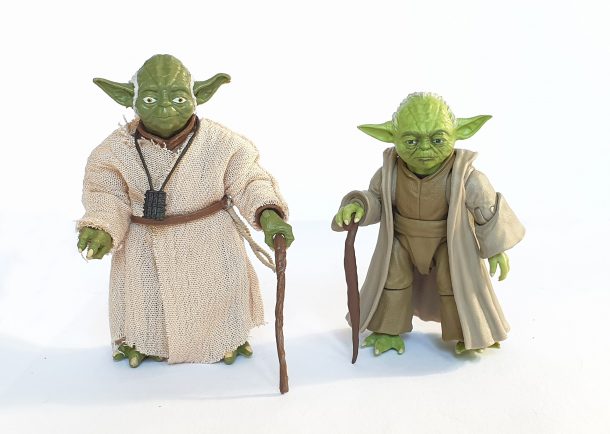 Also, Black Series Yoda is much too tall. SHF Yoda is shorter, but even he is still much too tall. I suppose both Hasbro and SHF chose to make Yoda taller than he is, so that he is a) easier to engineer and b) doesn’t look comically small. I think most collectors and fans don’t realize how short Yoda is supposed to be.

Here you see how short Yoda would really have to be if he had accurate scale: 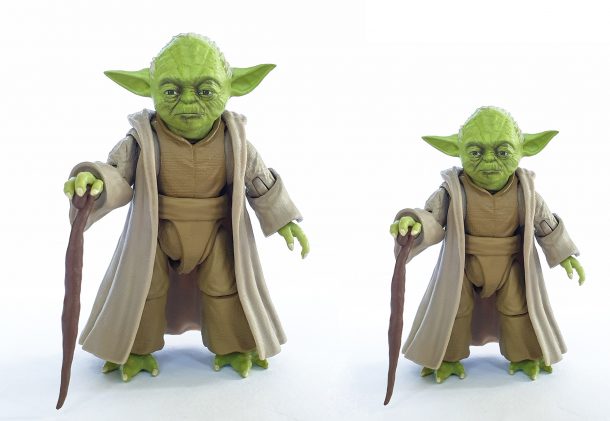 Yoda’s actual size in relation to the SHF figure

He’s tiny. Probably too tiny to make for an action figure that most fans would be happy with.

About skin color: at first I thought SHF Yoda is a bit bright, but now I think it’s the opposite, Black Series Yoda’s skin tone is too dark. When I compare photos of the figure with screencaps from the movies then the skin tone seems to be quite accurate.

Back the height, even somewhat taller Yoda scales nicely with human characters: 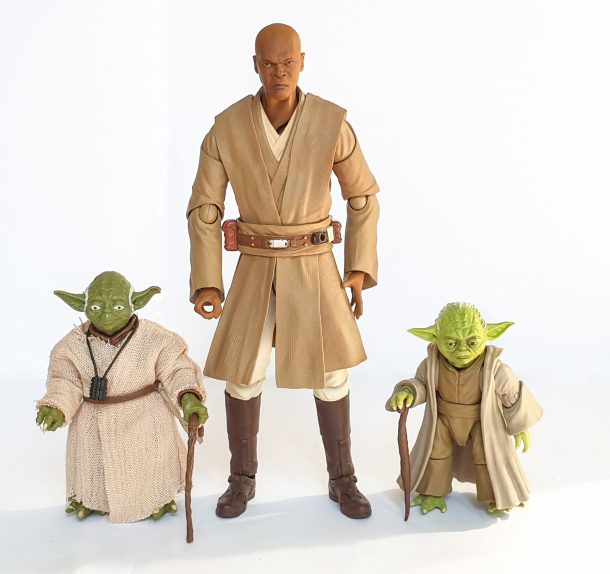 Now the actual Yoda would barely reach above Mace’s knees, but that would be really tiny. I think this scale works too. And it looks much more appropriate than Black Series Yoda, that reaches to Mace’s hips.

And one final thing about the figure. SH Figuarts has no illusions about for whom this action figure is for: 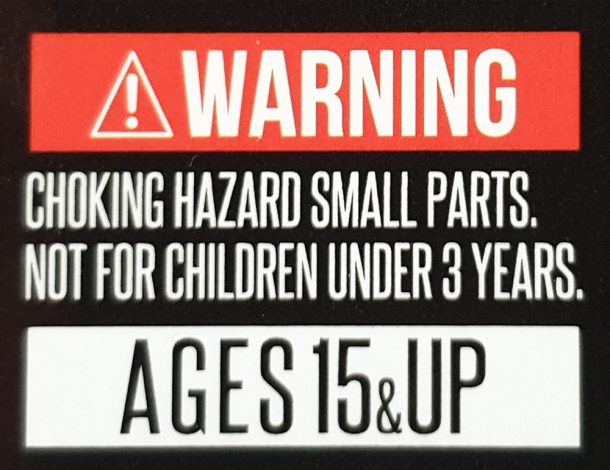 Hasbro (or Disney) still insist their action figures are for ages 4&up, which gives us bendy plastics among other things. I wish Hasbro would finally admit that no 4-year-old will ever buy or play with a TBS of TVC figure and stop the pretense.

So what about SH Figuarts Yoda?

In my opinion this is an excellent prequel Yoda. Sh Figuarts catches the essence of the character and gives us three beautiful headsculpts that not only look very accurate, but also convey Yoda’s emotions and feelings perfectly. And SHF didn’t skimp on accessories either, you get the ultimate prequel Yoda who can be used for anything you want. He can be calm and old, with stick, he can be a green rubber ball and bounce around with his lightsaber, and he can sit on his chair and discuss Jedi affairs with all the other Jedi we have no action figures of, ok we have Mace and Obi-Wan & Anakin.

Whether or not you like the SHF approach, with (soft) plastic robes and visible articulation, is down to taste. If you like it, then Yoda is an excellent figure. The Yoda collectors need and deserve! It beats the Hasbro version hands down, it doesn’t compare remotely even, even photo real Yoda still suffers from all the shortcomings the figure has. And while not true to scale either, this Yoda is believably short and not as bulky as Black Series Yoda.

SHF also showed an Empire Strikes back version of Yoda a while ago. So fans of the OT can hope to get an SHF Yoda that is a better fit for the OT. This Yoda here is for Revenge of the Sith, but of course you can use him for any prequel themed display. While prequel Yoda is different from OT Yoda, he can stand in for an ESB Yoda if you want to, he would still look better than Black Series Yoda. 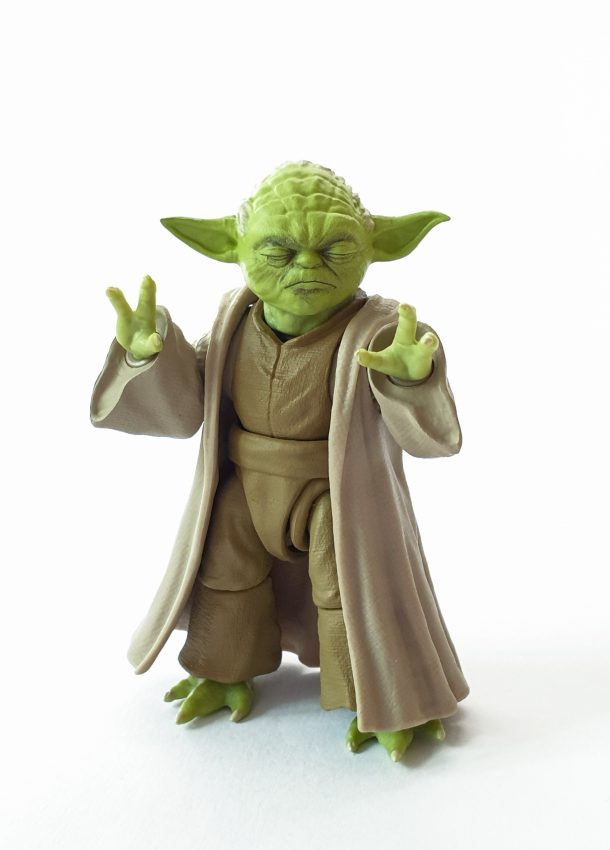 Buy my action figure, you will!

Previous Article: Stop Being A Man-Baby! It's For Kids!