This is certainly not a surprise anymore. If you followed the Cookie Monster Haslab project you know it was off to a very slow start, and never picked up the pace it needed in the following days. In the end the Cookie Monster project only reached about 20% of the required backers – 624 out of 3,000.

Now what does that mean for Hasbro and Haslab? Click through for a few quick thoughts! 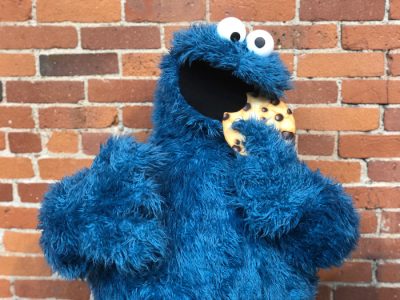 The Cookie Monster was always an odd project. How many adult Sesame fans are there who are willing to pay $300 for a plush toy? Now we have the answer, apparently very few.

According to two Muppet fansites they cooperated with Hasbro and helped them with the project, the admins of the sites also said they helped gauge demand. Apparently the fans who may have said they’d love a Cookie Monster didn’t really show up when they were needed.
I checked the sites every now and then, there was little in terms of promotion on the front page. No banner, no ad, no counter, nothing. Maybe more support was needed. Hasbro doesn’t seem to be willing to invest much in promotion and relies on the fan community to sort things out, apparently.

Now, what does that all mean for Hasbro and Sesame Street? First, the Sesame Street / Muppet collecting community may have thousands of followers on Facebook, one site has over 10,000 followers on Facebook, but their dedication to the franchise doesn’t seem to run all that deep, at least when we talk about (very) expensive merchandise. So maybe they like the characters, the shows, the clips on YouTube, the usual toys and figures, but they don’t need $300 plush toys.

In my opinion a Haslab project can fail, that’s not the issue, but this project failed spectacularly, the question is if such a colossal failure may damage the Sesame Street / Muppet brand, Haslab and subsequently Hasbro for getting it so very wrong. Now, I don’t think Sesame Street or the Muppets will be negatively impacted, but I am not so sure about Haslab. Will Hasbro still want to launch risky projects? You really don’t want to fail like that, less than 650 backers out of 3,000 is a statement in itself.

It’s still sad, the Cookie Monster was certainly a fun project, but ultimately nothing the fans of him wanted or needed.

Unicron is not dead yet, the project has 3,097 backers at the moment, almost 39%. But it also needs a serious boost in the last six days. Or else, it too will fail.

Should both projects fail then for various reasons, Transformers is not an exclusive license, collectors have a lot to choose from, Unicron also exists already, even if not as large, but many collectors certainly already own a version of Unicron. And Cookie Monster was too obscure, apparently.

So for future Haslab projects maybe Hasbro should think of something that a) is (mostly) exclusive to them and b) has proven to have a very dedicated fan community that will put the money on the table if asked (provided the project is a once in a lifetime opportunity).

So what’s next for Haslab? There is My Little Pony, which has an adult fan community. Maybe GI Joe, maybe Power Rangers – but then there’s always Star Wars, the only fan community, so far, that successfully funded a Haslab project.

In the end the only verdict is: the price was not right this time…