It seems we all missed a crucial detail about the leaked Galaxy of Adventures Kylo Ren figure. It does give away something we didn’t know before. Click through for more!

Update: it has been suggested that I may be seeing things. Graphic added, you decide! 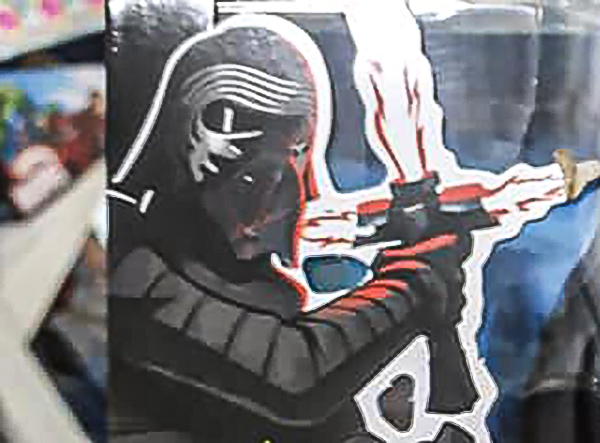 It’s difficult to see it on the figure itself, because of the reflections and low resolution of the photo (but you can see it when you know what to look for), but the stylized graphic on the box shows the new helmet as well. And the new helmet now features Darth Vader’s “snout” or mouthpiece. This is a stylized rendition, it is unknown if this is actually a part from an original Vader helmet or if it’s something that gets recreated when the helmet is reforged.

Either way, it shows that Kylo, who wanted to let the past die not too long ago, is still a huge fanboy of things from the past and his grandfather.

I think it looks somewhat weird, the two elements, original Kylo helmet and Vader’s snout, don’t really seem to fit together all that well.

Also, wasn’t it always a point that Kylo is not a Sith? And that Kylo thinks all of this, Sith, Jedi, needs to be left behind? The question is why the description on the box says “Sith Slash” then – and not “Force Slash”. Sith Troopers, Sith Slash, Kylo with a Vader fanboy helmet… is it possible that The Rise of Skywalker subverts The Last Jedi that was all about letting the past die, and instead Kylo (or the First Order) embrace Sith ideology and the past again?

Now we can speculate what all of that means.

Update: It has been suggested that I may be seeing things that aren’t there. Which is always a possibility with lowres photos like the one we have here.

What I am talking about is this:

It may the shadows on the box, but I can’t unsee this part of Kylo’s helmet protruding like Vader’s snout. The structure certainly seems to have a different shade of black in the artwork, suggesting it’s an extra piece, added to the original helmet. Either that or I am seeing things. You tell me!

Tags: Kylo Ren Let the past live - celebrate it if you have to Star Wars Episode IX: The Rise of Skywalker